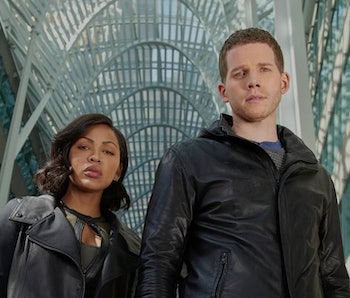 The Cruise is too busy clinging to planes to return for Fox’s small screen sequel to Minority Report. In his place is Meagan Good, who co-headlines the show as a cop along with Stark Sands, Nick Zano, and Laura Regan, each playing one of the Precogs. Same outline, only now it’s been ten years since Precrime was eliminated.

Steven Spielberg, who directed the 2002 movie, steps back to the less-hands-on role of executive producer. If you’re unfamiliar with the feature, it was in part based on a Philip K. Dick short story and starred Tom Cruise as John Anderton, a cop working in tandem with the Precrime department to apprehend criminals prior to committing their arrestable offenses. A brassy action thriller with plenty of genre flair for the sci-fi crowd.

No-one imagined it would get a sequel, because, frankly, the ending wrapped everything up. Spielberg was one of those. His involvement was finally stirred up by long-term business partner Darryl Frank who brought him a pilot script by Max Borenstein (2014’s Godzilla reboot.) “His point of view was from the Precog’s point of view,” Frank told Blastr. “It was the light bulb moment and when we brought it to Steven, I think that’s what he really responded to, being able to humanize the Precogs which we weren’t able to do in the movie. We see Samantha Morton’s Agatha for the last 30 minutes of the movie but she’s minutes out of the milk bath. In this, we’re 10 years later and see them go into society and go from there.”

Steered away from the bland procedural dramas of many earlier outlines, the show choose to focus on the three Precogs, Agatha, Dash, and Arthur and how they have learned to function in the real world. In 2065, a decade after the fall of Precrime, despite being tucked away by the government in a Witness Protection-style operation, their psychic abilities are as prevalent as ever.

Sands plays Dash. Still haunted by a ton of terrifying visions of future murders, he turns to Good’s cop Lara Vega, hoping to assist her in secret while alleviating his own guilt. His brother Arthur, played by Zano, goes all Darkside using his skills to launch a business empire. It’s only right that with such powerful insight someone abuses it to buy a boat. The third Precog, Agatha, returns as well, although Morton won’t reprise the role. Laura Regan, who made a bit of a splash on Mad Men, takes over. It seems she’s less of a leading character and more on hand for support, potentially for a bigger arc toward the end of the season.

As for the aesthetics and tone, the technology of the original won’t be absent despite the show receiving a fraction of the budget Spielberg had for the movie. Some of the ingenious elements created by the film’s “think tank group” included facial recognition advertising (eerily similar to user-directed Internet ads), spyder robots able to infiltrate locations unfit for humans, and a “sick stick” that prompts people to purge their guts when struck. The advancement of tech since the film’s release is making it way easier to present hypothetical tech from 2065. One of which is a selfie drone watch that “flies around and takes pictures.” Borenstein says, “The brand of the selfie drone is Narcissus. So for us, the fun is never just about the technology. There has to be the wit or the social commentary. It’s what technology is 50 years from today, just evolving out, and that’s what we’re doing another 10 years later.”

Early reviews on the pilot - shown to a select few at Comic-Con - have been somewhat mixed. i09 describes it as “unintentionally funny” due to the future looking far too shiny and nice when it should be a crime-filled wasteland akin to Escape From New York.

More like this
Culture
14 hours ago
The End of the Cold War Could Have Killed James Bond. Instead, it Made Him Stronger.
By David Grossman
Science
Jan. 26, 2023
Can this new artificial skin transform touch screens and video games?
By Joanna Thompson
Innovation
Jan. 25, 2023
Watch: This jail-breaking wireless robot melts and reassembles on command
By Jennifer Walter
LEARN SOMETHING NEW EVERY DAY.
Related Tags
Share: