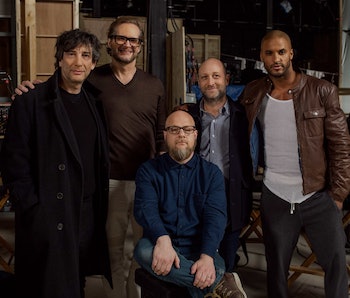 When the American Gods television show comes out in 2017, it will not only be delightfully strange, cinematic, and Ian McShane-starring, but it will also change the game for fantasy storytelling on television as boldly as Game of Thrones did. However, as much as the show will pave the way for a new future, Neil Gaiman, who wrote the book, has just given us a peek into its past.

On his website, he has revealed his love for retro sci-fi book covers from the ‘70s and ‘80s and his wish for American Gods to have such a cover. And because he’s Neil Gaiman — a magical wizard and, let’s face it, a publishing house’s dream — he gets what he wants. A retro old-new cover perfectly fits the themes of the book. There are several planned, done by artist Todd Klein. Behold the first:

According to Gaiman, “Each of them looks like a different kind of book from a different era. This is the first of them. In my head…it’s probably from about 1971…” He’s right, it perfectly evokes Ursula Le Guin’s early work or Jack McDevitt’s or Tim Powers. It only reinforces American Gods as a malleable story that could and should bend with the winds of the time.

American Gods will air on Starz in 2017. Check out our breakdown of the trailer here.

More like this
Entertainment
6.21.2022 1:00 AM
Game of Thrones sequel could ruin the best part of the series finale
By Alex Welch
Culture
6.20.2022 12:00 PM
25 years ago, the worst Batman movie ruined the franchise — and inspired a modern trend
By Dais Johnston
Science
6.30.2022 10:00 AM
Behold! Curiosity discovers Martian rocks contain an essential ingredient of life
By Allison Parshall
Share: