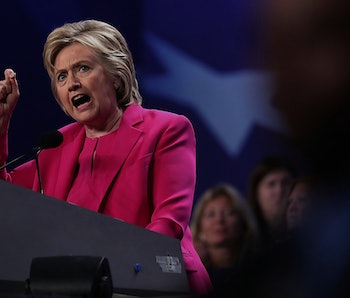 Hillary Clinton and Donald Trump don’t agree on much. They do, however, agree that hand gestures can be powerful if employed well and repetitiously. Just watch them. He’s got that gun thing and she’s got the thumb thing her husband made a meme in the nineties. Why all the pointing? Isn’t it rude?

Yeah, a little bit. But science tells us that politicians need to make these gestures if they want to drive their arguments home. Turns out that rhetorical points must be made physically.

Peter Bull at the University of York published a study in 1986 — the Reagan years, for those of you keeping score at home — that considered the flagrant gesturing within political speeches and the purpose it served. He found that, much like a conductor leading an orchestra, gesturing helped speakers with intonation and placing stress. When Trump is emphasizing a point, he often brings his arms wide and pairs it with his trademark “yuuuuuuge”; that’s him stressing to the audience that it’s a problem they should be concerned about. In the case of the much-parodied Clinton thumb, he’s sort of air-pounding his point at you. It’s kind of a visual cue to the audience that this point in the speech is one that counts.

Bull also finds, importantly, that gesturing is a cue to the audience to applaud — or shut up. A great example of this is Vice President Joe Biden’s Wednesday night speech: At the 13th minute, amidst cheers and chanting, Biden raises both his hands in the universal “stop” symbol and quells the rambunctious crowd.

Of course, there’s also the idea that gesturing might physically make you seem bigger. This goes back to basic ideas of masculinity, where men inflated themselves by taking up as much space as possible: puffing their chests, taking a wider stance, and yes, going all spread-eagle with their arms. And any Nature binge will illustrate that male primates claim space and power by taking their arms out in an east-west direction.

That said, gesturing doesn’t necessarily make for an effective speech. Obama and former President Clinton are heralded as master orators because they can hammer down a message through sheer eloquence; the gestures are just the sprinkles on the cake. There’s also a lot to be said without hand gesturing: Speaker of the House Paul Ryan’s noticeably subdued demeanor at last week’s RNC in Cleveland was clearly illustrated to any casual viewer, with his hands making an appearance only near the end of his speech; similarly, the hands of Ted Cruz — who famously offered no support to his party’s nominee — were basically strapped to his sides throughout his speech.

Here’s the obvious caveat: Bull’s study focuses on males. It’s partially because of the weak American history in electing females to office (at least in 1986), which means our sample size to study women’s hand gesturing doesn’t include much breadth. We’ve elected more women to office now.

And curiously, if you look at the women who spoke at the convention in prominent roles, there’s a bit of a divide, too. Consider the two women on the Republican side who scored primetime spots to humanize and promote Trump: the candidate’s wife, Melania, and his daughter, Ivanka.

Neither raised their hand above the podium besides to wave.

Now consider the women of the Democratic side. The most important speech thus far this week in Philadelphia has been from First Lady Michelle Obama, whose hands are frequently shown: patting her heart, gesturing to her left and right, frequently bringing her thumb and first finger together as if to teach us something.

Clinton, of course, hasn’t spoken yet, but here’s video of her clinching the Democratic nomination in June, alternating between a V-shaped air-hug, a flat open palm she seems to favor heavily — and yes, the infamous pumping fist for each bullet point her husband made infamous.

Clinton, in fact, presents an interesting case study in body language in this election. Often criticized for being too hawkish and not ladylike, she also must present herself as a tough leader that DGAF about gender norms. It could be an anomaly, but it’s curious to see how the Democratic women present themselves with their hands more openly than the Republican women, and might speak to differences in not just gender and persuasiveness, but also to how a message — or broadly, a political theme — is conveyed.