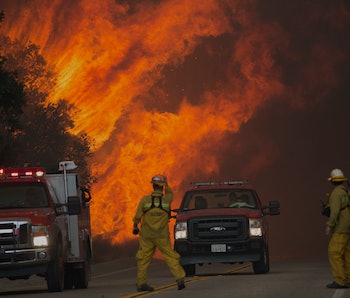 The Democratic National Committee has made climate change one of their key issues, and boy, are they doubling down. Today, the DNC released “Not Reality TV,” a completely bonkers short film directed by James Cameron and narrated by Sigourney Weaver that’s a completely terrifying look at the ravages of global climate change.

In traditional James Cameron style, it’s also way, way over the top. The video is a haunting mashup of terrible images of hurricanes and forest fires set to pounding drums and a rising string line while Sigourney Weaver reads lines like “crops are failing. Our children are in danger,” like she’s narrating the introduction to a zombie apocalypse movie.

Which, in some ways, she could be. 2016 is already the hottest year on record, ever; Greenland’s ice caps are melting so fast that scientists briefly thought their equipment was broken; and extreme weather often contributes to economic instability and violent conflict. The point is, this shit is very, very bad. Since the Republican party has yet to produce any sort of coherent policy plan to combat climate change, it’s nice that the Democrats at least seem to be putting it front and center. Sure, Cameron’s video may be the climate change equivalent of the apocalyptically-annoying ASPCA ads with Sarah McLachlan’s “In the Arms of an Angel” playing, but at some point, anything that gets people to feel a strong emotion about the looming specter of climate change is probably worth it.

Check out the short film below.