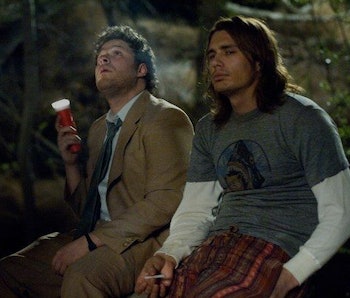 Noncommittal stoners are often satisfied with a secondary high, siphoned off the smoke exhaled by their bong-hitting compatriots. Such mild interventions on sobriety are considered relatively harmless, at least much less so than toking up first-hand. But a new study published Wednesday in the Journal of the American Heart Association suggests that getting passively high is not as chill as it may seem — not because weed itself is especially dangerous, but because smoke, in general, is not a good thing to blow down your lungs.

After carrying out a series of experiments carried out on rats, the researchers concluded that inhaling secondhand pot smoke is even worse on heart function than secondhand cigarette smoke.

The researchers — who worked with the American Heart Association — focused on the effects marijuana smoke had on the ability of blood vessels to carry oxygen throughout the body as they got high on weeds. Rats that spent just a minute in what was essentially a weed hotbox had an impaired ability to carry oxygen in their arteries for the next hour and a half; in the same experiment with tobacco smoke instead, produced effects that lasted only 30 minutes.

Though these effects are obviously temporary, repeated offenses on the blood vessels could have long-lasting effects. As arteries get consistently stressed out, the chances they’ll harden and clog increase, making it much harder for them to pump blood throughout the body. But the real problem, the researchers note, is not the drugs themselves — neither THC nor nicotine were blamed — but the actual burning of the plant that carries them. (Rolling paper, incidentally, was also not an issue.)

As the study was carried out in stoned rats, there’s plenty of research to be done before confirming that the findings apply to their human counterparts, though the researchers point out that the similarities in the ways our arteries react to smoke has been established before. The study is meant to serve as a reminder that breathing in smoke — whatever its source — is generally not a good thing.

“There is widespread belief that, unlike tobacco smoke, marijuana smoke is benign,” Matthew Springer, Ph.D., the study’s senior author, said in a release. “We in public health have been telling the public to avoid secondhand tobacco smoke for years, but we don’t tell them to avoid secondhand marijuana smoke, because until now we haven’t had evidence that it can be harmful.”

More like this
Innovation
Jan. 16, 2023
3D-printed “organs” could lead to better drugs
By The Conversation and Chengpeng Chen
Science
22 hours ago
NASA just directed its Lucy mission to target a skyscraper-sized asteroid
By Doris Elín Urrutia
Science
23 hours ago
Scientists find two key ingredients for life in ancient meteors
By Jeff Nagle
LEARN SOMETHING NEW EVERY DAY.
Related Tags
Share: