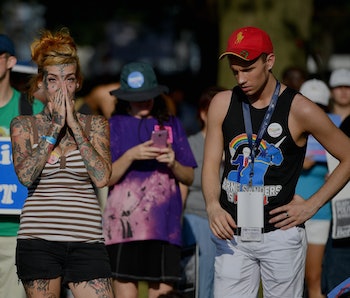 Moments before Hillary Clinton accepts her party’s nomination at the Democratic National Convention on Thursday, members of the Poor People’s Economic Human Rights Campaign will literally raise a stink by staging a fart-in. Yes, that is exactly what it sounds like: The unabashedly flatulent protestors, pissed off about the two-party political system and the gaps in policy it creates, are planning to pass gas as a single foul-smelling and hyper-principled front.

There’s one big problem here: Farts are greenhouse gas bombs. Releasing hot methane ass-vapor into the atmosphere is not very on-brand for a super-liberal organization that champions climate change policy in addition to vehemently opposing the democratic primary process.

Still, that minor discrepancy hasn’t stopped protestors like Dr. Walter Tsou, a Philadelphia-based doctor and former president of the American Public Health Association, from joining the flatus fest. “It is its own symbolic comment, actually,” he told Inverse, when pressed about the globe-warming consequences of the fart-in. “This is our statement saying this is the only natural gas we should be producing.”

If all goes according to plan on Thursday, plenty of said natural gas will be produced, albeit somewhat unnaturally. Tsou and members of the PPEHRC, including its founder Cheri Honkala, the Green Party’s vice presidential pick in 2012, plan to wolf down huge amounts of gas-inducing foods in the hours leading up to Clinton’s speech.

“We tell people, if you want to protest, you can have your beans with your meals,” Tsou says. “Or some people who are lactose intolerant may want to drink dairy products. And then we’ll have a whimsical opportunity to express ourselves with a proposed fart-in.”

Fart-ins have a surprisingly rich history on the absurdity of political times rather than an actual sensory assault. They’re thought to have been the brainchild of Saul Alinsky, author of the 1989 future Bernie Bro bible Rules for Radicals, who discussed the fart-in ethos in an interview with Playboy in 1972 and, ironically, was the subject of much of the senior thesis Clinton wrote in 1969:

I’d call them absurd rather than juvenile. But isn’t much of life kind of a theater of the absurd? As far as being frivolous is concerned, I say if a tactic works, it’s not frivolous.

The PPEHRC’s handle on the science of flatulence is pretty stinkin’ solid. Beans, as many of us have personally experienced, turn your gut into a ticking methane bomb. The “magical fruit”‘s fart-inducing ability comes down to the fact that human stomachs aren’t equipped to handle digesting them. Unable to be broken down in gut, they get handed off to the bacteria in our intestines, which are happy to do the job for a price — namely, clouds of methane and hydrogen gas that build up and eventually push through the backsides of Hillary-doubting political dissenters.

While unlucky passers-by will undoubtedly hold their breath when confronted with the PPEHRC’s stunt, a study published Tuesday in Microbial Ecology in Health and Disease suggests that farts contain gaseous neurotransmitters that affect our brains, minds, and behavior. Still, whether those brain signaling chemicals have the power to sway political ideology on the molecular level remains to be seen.

The PPEHRC is in a good place to attempt experimentation because their wellspring of fart fuel appears to endless. “We’ve gotten contributions of baked beans from all over the country,” Tsou says. “It’s amazing.”

More like this
Culture
7.1.2022 9:00 PM
Male celibacy has evolutionary benefits — but not for the reasons you think
By Ruth Mace, Alberto Micheletti and The Conversation
Mind and Body
2 minutes ago
A shockingly low percentage of American adults have optimal heart health
By Katie MacBride
Science
7.2.2022 12:00 PM
Why is my cat scratching furniture? The answer might surprise you
By Tara Yarlagadda
Related Tags
Share: