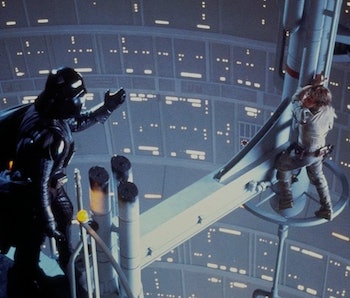 You can count on one thing before the eve of any film or pop culture event: all caps warnings splashed across stories that scream SPOILER ALERT, warning readers of an oncoming discussion that will tell you what happens in a movie — because obviously, knowing what’s about to happen at the next turn ruins everything for you.

But is the vitriol reserved for spoilers deserved? Spoiler alert: It’s a murky answer.

Most psychology studies agree that spoilers really aren’t as bad as you fear. Contrary to what you might expect, psychologist Alan Jern writes that people are actually more likely to enjoy something when it’s easier to process. It’s because we’re experiencing a different type of pleasure when we watch, read, or hear something the second time versus the first.

“The first time you hear a song, you might not think it’s anything special,” Jern writes on The Conversation. “But after the song becomes more familiar and you can anticipate how it will unfold, you realize that you really like it. Because the song has become more fluent, you’ve found yourself enjoying it more.”

While finding out that Darth Vader is actually Luke’s father (oh crap, spoilers!) may seem a little different than hearing “This Is What You Came For” for the gazillionth time and finally accepting it’s a good song, both situations hinge on the same premise — familiarity.

But we simple beings enjoy easily processed information and sometimes get so caught up in tension and suspense that we become distracted from a story’s aesthetic qualities and details. A 2013 paper published in Psychological Science on spoilers brings up the schema discrepancy theory — with increased predictability comes an increased positive response.

In a series of three experiments, psychologists Jonathan Leavitt and Nicholas Christenfeld found that very simple spoilers increase the enjoyment of consumption experiences. Having a few things laid out for you before a movie or book begins acts as a sort of blueprint for your brain to follow once you get in it. Leavitt and Christenfeld write:

“Spoilers, despite their name, seem to increase enjoyment of stories. This could be because readers enjoy reading expected endings, because knowing the ending allows them to appreciate aesthetic elements instead of guessing what will happen, or because knowing the ending increases fluency by enabling readers to correctly interpret clues and events.”

Some researchers have studied people who re-watch movies or reread books in order to better understand the effect of spoilers. A 2008 study found that people who had read the novel (a form of spoilers) before seeing the movie adaptation were more “transported” into the film, compared to people who hadn’t read the book. The researchers connected this result to the participant’s need for cognition — the more someone enjoys effortful and reflective thinking, the less they are going to enjoy spoilers.

There’s the rub — it’s true that spoilers can ease our brains, and therefore increase the enjoyment of movies or books by letting us focus on plot and imagery more. But that’s not necessarily the case for everyone, as a study on Lost fans shows. It found that some viewers completely rejected spoilers while others found them to be interesting and enjoyable. Researchers tried to recreate the findings of other studies that found spoilers to be enjoyable in 2015 and instead found that their 412 test subjects were pretty pissed with the spoilers. For these viewers, unspoiled movies were more fun, more suspenseful, and more “enjoyable in general.”