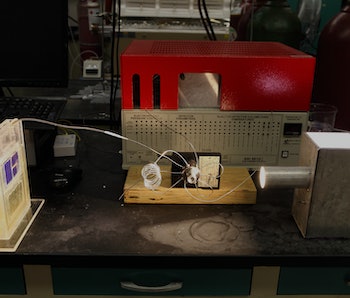 A team of scientists from the University of Illinois at Chicago has engineered through technology what previously existed only in nature — an artificial leaf that perfectly mimics the process of organic photosynthesis, converting carbon dioxide into usable, burnable fuel using nothing more than the power of the sun.

In a new paper published this week in Science, researchers detail how the leaf is actually a two-fold win — not only does it remove ambient pollutants from the atmosphere, it produces energy-dense fuel. And by focusing on a key family of transition metal dichalcogenides (TMDCs for short) to form the catalyst, they designed the model for about 20 times cheaper than any comparable existing catalysts.

The artificial leaf doesn’t look like an organic leaf, but it does what an organic leaf does. Powered by sunlight, the leaf produces a kind of synthetic gas called syngas that can be subsequently converted to diesel or a number of other kinds of fuel. In addition to capturing CO2 and producing hydrocarbons — which, by the way, is the sort of thing that could erase our need for fossil fuels if implemented on an industrial scale — the leaf can convert carbon dioxide to sugar (just like how plants produce fuel).

“With this approach, we can convert the energy of the sun into chemical bonds,” Dr. Amin Salehi-Khojin, an Assistant Professor of Mechanical and Industrial Engineering at the University of Illinois at Chicago and the study’s senior author, tells Inverse. “It’s really a breakthrough in chemistry and environmental science, this stand-alone design. We’ve been able to discover a new family of materials; the chemistry is improved by 1,000 times.”

That’s not a figure of speech — in addition to being 20 times cheaper, this cell is literally 1,000 times more efficient (meaning the reaction takes place 1,000 times faster than do other catalysts created with other metals. The team has been working on the leaf for about two years and it has already filed for a patent; Salehi-Khojin estimates they’ll have it within the next year, maybe sooner.

They’re currently looking for collaborators from the industrial sector to help implement the cell on a large scale, meaning wind and solar farms. The technology also has potential for smaller-scale applications, like with cars and various other components of the transportation sector.

Probably the coolest prospective use, though, is within the Mars missions. The cell technology could not only help provide oxygen to astronauts on the journey to Mars, but produce sugar as a food source.

Correction: The first reference to the university in question initially read University of Chicago, not University of Illinois at Chicago. The article has been updated.

More like this
Science
Jan. 29, 2023
NASA-funded study to research if bacteria could help form building materials on Mars
By Matt Williams and Universe Today
Science
Jan. 22, 2023
This nuclear-powered rocket could get humans to Mars in less than 2 months
By Universe Today and Matt Williams
Science
Jan. 31, 2023
If Alien Life Exists on an Ocean World, It May Follow These Chemical Rules
By Kiona Smith
LEARN SOMETHING NEW EVERY DAY.
Related Tags
Share: