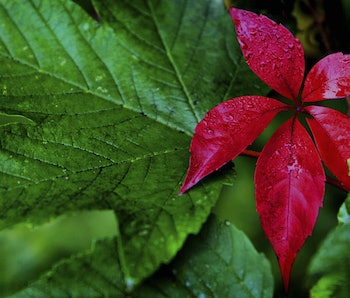 Since we first dreamed of harnessing the solar power of the sun, researchers have looked to the plants all around us for inspiration in hopes of copying the process of photosynthesis. Now, researchers at Harvard claim they’ve made a system that does just that — only their leaf is ten times as powerful.

Nocera has previously published his works detailing this system and how it converts sunlight in to liquid hydrogen, but this latest paper shows they have massively increased the efficiency.

“Instead of having a gas station, the sun is hitting your house, you have an artificial leaf, you could be generating your own fuel,” says Daniel Nocera, professor of Energy at Harvard, in a video about the bionic leaf.

It works by sandwiching a photovoltaic, or solar, cell between two thin metal oxide catalysts to form the leaf itself. It’s then submerged in water at room temperature and mimics the process of photosynthesis by spitting water molecules into oxygen and hydrogen. Those hydrogen molecules are then combined with carbon dioxide and turned into clear rubbing alcohol. Drivers could then use it in their cars much like ethanol.

Nocera has been able to do all of that for a while but it wasn’t all that efficient. The catalyst he used was creating oxygen molecules that destroyed the bacteria’s DNA and to avoid that he was forced to use an abnormal amount of energy, thus decreasing the efficiency output.

“For this paper, we designed a new cobalt-phosphorous alloy catalyst, which we showed does not make reactive oxygen species,” Nocera explained to the Harvard Gazette. “That allowed us to lower the voltage, and that led to a dramatic increase in efficiency.”

He says Bionic Leaf 2.0 can currently capture 10 percent efficiency from the sun, but he told Harvard Magazine it could some day reach efficiency of 70 to 80 percent.

Speaking with Inverse earlier this year, Nocera speculated his system would be capable of this sort of efficiency but he hadn’t proved it yet. Now that it’s here, the possibilities are quite exciting.

More like this
Science
8.5.2022 1:00 PM
The most miraculous sci-fi movie on Netflix reveals a scientific debate over aging
By Tara Yarlagadda
Science
12 hours ago
Biologists fired tardigrades out of a high-powered gun — the results have implications for alien life
By Kiona Smith
Science
8.1.2022 3:00 PM
After stellar ancestors exploded as supernovae, their stardust formed our Solar System
By Doris Elín Urrutia
Share: