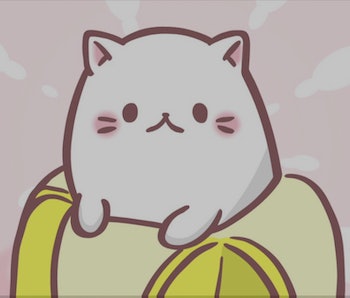 As much as the anime genre is full of great characters, beautiful animation, and profound storylines, it’s still pretty much a given that some of it is strange – extremely so. Delving into the anime shorts just accentuates that fact. Anime shorts are rarely over 10 minutes and they are typically either childrens programming, comedies, or experimental animations and storytelling.

These are some of standout series that really make you tilt your head, but still find yourself wanting to watch, anyway.

A cat unpeels its skin and pokes his head out. That may sound disgusting and grotesque, but when I mention skin, I’m actually talking about the skin of a banana and the cat’s head pokes out of it. Bananya (a combination of the word banana and Japan’s equivalent to our meow — nyan) is a species of cat that hides inside of bananas and only come out when humans aren’t around.

The premise of the anime is to follow this kitty, named after the species, and his friends in their everyday life, the first episode telling us of his dream to become a chocolate-covered banana. There are only four episodes out so far.

This one’s about a girl going to school at an art institute becoming the agent of a new and upcoming boy band. Okay, doesn’t sound too weird. It actually sounds like it’ll be the start of a harem anime, but that is not the case. The boy band is a group of marble idols: St. Giorgio, Mars, Hermes, and Medici.

This one is probably the most popular and well-known short anime of the bunch, personifying all of the different countries as young men and keeping with all of their stereotyped personality traits.

The animation looks like a children’s book come to life, especially when the short episodes mimic silent films and Tortov Roddle’s thoughts pop up on screen in between actions. He travels the world with his fashionable flapping scarf and top hat atop his long-legged pig. This follows their strange and mystical adventures across the landscape.

A little girl can see ghosts and because of that, the people at school tend to stay away from her, claiming that she is a witch because weird stuff always happens around her. But the little girl named Wakaba soon finds a friend with a strange pink blob that can only say “pupipo.”

‘I Can’t Understand What My Husband is Saying’

This one is actually just a cute slice-of-life about a newly married couple getting to know each other more, but the husband is an otaku and blogger that hates working and the wife is a dedicated office worker that’s just trying to understand what her husband is saying. This is rife with pop culture references, and considering the episodes are only a couple of minutes long, that means they drop into the episode every 10 seconds.

Each episode is only about 5 minutes and they each star a new boy. This anime is unique because it is in first person and the boy of each episode talks to the viewer, saying what happened during his day, his hobbies, and what the viewer means to him. The first episode shows a young man clutching his pillow and saying how much he missed you, another says that you’re his only friend. It’s like personal attention ASMR, but with anime characters.

The blood types are personified as cute little mask-wearing sprites and they each hold true to the stereotypes of their blood type’s personality traits. This one is surprisingly educational and pretty hilarious.

An 11 year old brother and a 17 year old sister star in this short anime, but it’s not the a typical story about siblings. The 11 year old looks like he’s 17 and the sister looks like she’s 11. These few minute episodes dedicate their time to the misunderstandings that happen because of the inconsistencies of their heights.

Otherwise known as The Master of Killing Time this is a humorous anime that stars two high school students during class. Toshinari Seki comes up with elaborate and astounding ways to kill time on the top of his desk in the corner of the classroom and no one ever seems to notice except for Rumi Yukoi, the girl that sits next to him. She’s fascinated with his inventions and scenarios, but they always seem to get her in trouble instead of Seki.

The name is very true to what the anime is. With the World Food-Culture Conservation Organization backing them, this team travels the world to snuff out any and all restaurants that are serving non-traditional sushi. This is a satirical/commentary piece that actually stems off of an incident about 10 years ago when the Japanese Minster of Agriculture at the time ate sushi at a restaurant in America that served its Japanese cuisine with Korean BBQ. He thought that it was an insult to Japanese culture and suggested having secret inspectors go undercover to different restaurants and review their authenticity. The name for the anime is what the media backlash dubbed his idea.

More like this
Culture
6.13.2022 6:03 PM
Everything we learned about Spider-Man: Across the Spider-Verse at the Annecy Festival
By Robin Bea
Entertainment
6.24.2022 11:15 AM
Behind the scenes at “Herogasm,” The Boys’ most NSFW episode ever
By Aaron Pruner and Jake Kleinman
Entertainment
6.23.2022 4:42 PM
Obi-Wan Kenobi Easter egg gives the show’s best scene a deeper meaning
By Dais Johnston
Share: