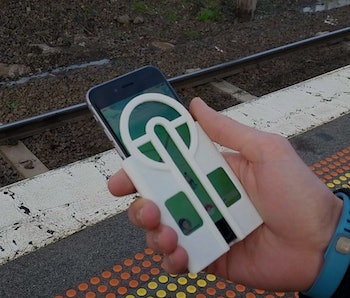 Every Pokémon Go player understands the desire for the perfect toss. But we can’t all be athletes. Enter Jon Cleaver’s Pokéball Aimer, 3D-printed case that promises straight tosses every time.

The Pokéball Aimer is like using bumpers on your bowling lane. It’s cheating, people will definitely judge you, and it’s designed to devalue skills learned through onerous repetition by making a task ridiculously easy. In other words, it’s exactly what every person tired of losing so many precious Pokéballs could ask for.

The perfect throw really isn’t all that hard if you know how to do it: Relax, guesstimate, shoot, and, if you’re well-practiced (which you should be by now), throw a curve ball. But who wants to do all that when a 3D printer can make it so much easier?

The Pokéball Aimer is designed only for the iPhone 6, making it a pretty niche section of the Pokémon Go cottage industry. If you have a printer you can print it yourself, but if you don’t already live in the future you can buy one from Cleaver’s Etsy page.

Apparently, despite the tacky looking design, the inability to work with any other cases, and the annoyances of having to put on and take off the case every time a desirable Pokémon pops up — Charizard, anyone? — the Pokémon Aimer is immensely popular. Cleaver’s Etsy page shows the product was favorited 208 times, and recently sold out.

“Due to an OVERWHELMING demand I need to close the store for a few days whilst I catch up with demands,” Cleaver writes. “Don’t worry, I will be back in just a few days with more models designed, such as for Samsung phones, iPhones, and many more.”

But the specs downloads on the 3D printing website Thingiverse shows only three of them made by other people, and Cleaver doesn’t state his output. Nearly all of the comments for the product ask for it to be made for more models, though, and it’s already spawned a copycat French store selling the exact same design, so maybe Cleaver isn’t exaggerating.

Want one for yourself? The overwhelming number of comments on the Pokémon Aimer are just asking for new models, but here are some user reviews via Thingiverse and My Mini Factory before you get too deep in Pokémon life hacks.

Or, just cheat the cheaters