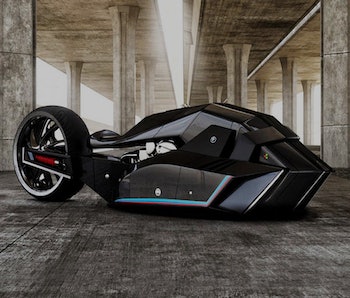 While luxury German brand BMW is usually lauded for its timeless and opulent car models, its new motorcycle is, well, anything but. Instead of luxury, BMW went for raw power and menace. Mehmet Doruk Erdem’s design for the BMW Titan, a new vaporware concept for a groundbreaking motorcycle, mimics the sharp, angular body lines of a shark. And like a shark, it’s meant to be fast, as BMW sets its sights on the 376 mph land speed record in formidable, sleek style.

The Titan draws inspiration from the body of a shark to improve aerodynamics: its rear wheel is like the tail, the sides are like fins, and the air-intake system mimics a pair of gills, according to Tech2. The recently unveiled model — which, yes, is still just a concept — features an airtight front end that reduces resistance and channels airflow toward the “gills” at the rear end of the vehicle, cooling the engine. The ultramodern metrics contained within the cockpit (suspension status, cooling system operation, area-specific temperatures) are designed for ideal aerodynamics, and the turbo-powered engine that connects to the rear tire by way of a swing arm tops off the Titan’s Batmobile-esque appeal.

Because the Titan was specifically designed with the intention of breaking land speed records, the vehicle’s use will likely be reserved for speed racing environments if a working model is ever released. Erdem envisions the Titan breaking records at the Bonneville Salt Flats speed week, for example, where speed-craving audiences gather to watch the fastest vehicles in the world show off.

Even if the Titan only becomes available for racing purposes, its impossibly suave design points to an imaginative future in which vehicle design gets inspiration from something as distant as a toothy, underwater predator. Get a good look at the Titan’s Batman-referencing, shark-inspired design now, because once it’s zooming by at record-breaking speeds, it will just appear as a ferocious black blur.