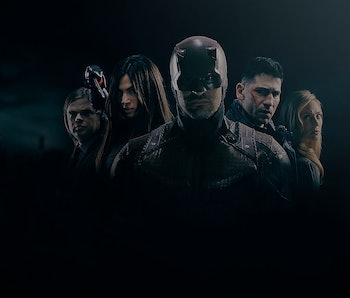 After the finale of Daredevil’s second season, fans were left with what seemed like hundreds of new mysteries about the dark future of Matt Murdock and his surrounding cast. Newcomer Punisher became an instant fan-favorite, and at today’s Luke Cage fan panel, a flurry of new, unpredicted announcements and exclusives awaited fans at San Diego Comic Con behind the doors of Hall H.

Among them was the confirmation that Daredevil will have a third season, continuing the adventures of Matt and Foggy Nelson (with a dash of Elektra, the Punisher, and even more New York City-based vigilantes). On stage, Marvel exec Joe Quesada mysteriously took the place of the Luke Cage cast, which had just finished introducing the show’s official trailer. Then, he turned to the crowd, and announced the show’s third season. Marvel followed it up with a teaser on Twitter:

Daredevil’s rave reviews kicked off the beginnings of Marvel TV on Netflix, featuring shows that cohabitate the same universe as Agents of S.H.I.E.L.D., Agent Carter, and Marvel’s feature films. The lauded series is still sitting pretty on almost all critics ratings sites, holding a 98 percent Fresh score on Rotten Tomatoes. The show’s first season saw 10.7 percent of Netflix subscribers watching at least one episode within the first week of release. Netflix’s shows currently focus on the origins of The Defenders: Luke Cage, Daredevil, Jessica Jones, and Iron Fist. Daredevil is the only show right now that has surpassed its second season, with the impactful and dark Jessica Jones on its way.

Season 3 of Daredevil is expected to debut in late 2017.