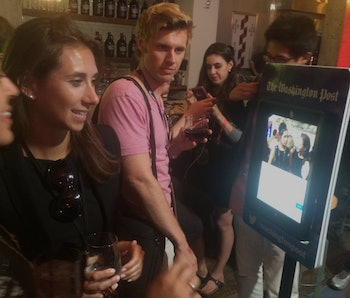 Could a selfie stick on a Segway change field journalism?

A robot that was essentially a combination of the two and its handler was roving around a Republican National Convention viewing party in Cleveland this week, letting people take selfies and tweet them out from its touchscreen. It doesn’t have an official name yet, but some of the ideas the Washington Post — the Jeff Bezos-owned newspaper that brought the ‘bot — has been throwing around are Johnny 5 or WaPo Bot, and the Washington Post journalist Ed O’Keeffe had a campaign to name the robot Ed.

The robot uses gyroscope and accelerometer sensors in its base, is made by Double Robotics, and retails for $3,000.

“The idea is we wanted to explore what it would be like to have an actual robotic reporter covering the conventions,” said Jeremy Gilbert, director of strategic initiatives at the Washington Post. “We’ve done a couple of different things so far. On Monday, we went to the convention hall, circled the space, meeting delegates and were live streaming on Periscope.”

“A bunch of people interacted, and it went both ways,” Gilbert added. “We had people asking questions from the livestream we were answering via Periscope. We had people in person ask questions of the robot. We had give and take.”

In its life in the normal commercial market, Double’s robot is used primarily for remote video conferencing. And last fall, the robot waited in line for an iPhone. But there’s no reason to limit its potential, Gilbert says: “Automation and technology are impacting all of our worlds, but especially journalism.”

For instance, there are a lot of places where it wouldn’t be safe for a reporter to venture, either in a war zone, in especially violent civil unrest, or in the middle of extreme weather. But that wouldn’t have to stop the JournoBot. “It can be operated anywhere there’s internet access, so we tried putting a hotspot on it so it can go anywhere,” said Gilbert.

It can be controlled with a tablet, laptop, or phone, and although it doesn’t move quickly, it rotated and moved forward and backward slowly but surely.