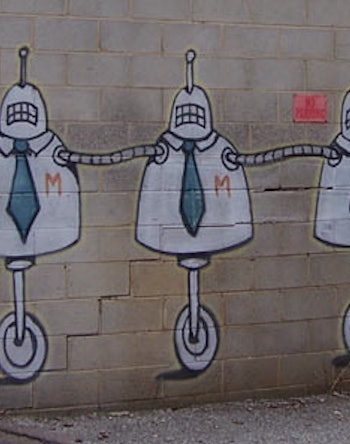 Waiting in line sucks. Waiting in line is also a truth of modern democracies, a social contract that we accept when we wish to acquire something that many other people want too, be it exotic pastries or good movie seats or shiny new bits of technology stamped with plant ovaries on the back. But on Thursday the system was shattered. With the help of a robot, a human defeated the queue.

Australian Lucy Kelly sent a robot — more specifically, a wheeled platform with a telepresence iPad — to Sydney’s Apple Store in her stead, so that she could acquire the iPhone 6S from the comfort of her own office. It’s a cute idea (Mashable has, adorably, rounded up people taking selfies with Lucy).

The humans with which the robot shares a queue have not yet expressed anger. But if this practice takes off — and hey, paying people to wait in line for you is a thing, so why not robots? — there are going to be some ugly questions we need answered.

For instance, what happens when someone cuts, buts, and coconuts a robot? Should you cut in front of a human, you are a dick; there are no ethical implications of walking around an iPad-on-wheels on the sidewalk. Even if there’s a person on the other end of the iPad, and he or she displays indignation, you can turn the iPad off. If you are so inclined, you could steal it. Robots, as they stand now, are inanimate property and have all the rights of a bicycle. If you left a bicycle to take your place in the cronut line, you are a not only a dick but you also have a faddish taste in breakfast treats; people will ignore your bike, and some Gen-Z ne’er-do-well will steal it for Minecraft money.

Consider the parking space saver, the curious habit of Northern urban-dwellers to use a lawn chair or trash can to secure a spot of road cleared from snow. At first blush, the line-bot and the parking chair may appear similar; they are both objects that represent human investment. But unlike the line-bot, the parking chair is a Lockean proviso — the chair’s owner has spent time to carve out the snow, thus entitling him or her to a parking space. The robot in a queue requires no such effort, only that someone once purchased a machine. At that point, just spend the cash to get your goods delivered by Amazon drone.

Plus, if you violate the spirit of the Southie parking chair, someone will slash your tires. What’s a robot gonna do, wheel over your toes? Not after HitchBot’s grisly demise.

The iPhone robot double worked because it’s novel and makes for a nice selfie. But once humans in line get angry — and nobody’s as primed for perceived slights as people who feel they’ve been waiting for longer than their due — the jig is up.

A man once declared, “Hey, we don’t serve their kind here!” Whether you sell space booze or iPhones, it would be wise to heed him.