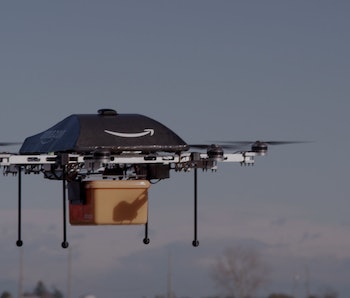 The idea of a robot whizzing through the air straight to my door to deliver something I ordered a half an hour ago seems pretty cool. It’s one of those “the future is now!” ideas that people 50 years ago thought would be commonplace along with flying cars, personal robot butlers, spaceports, and hotels that don’t charge extra for WiFi. We can dream, right?

But delivery drones also bring a downside to that sweet, sweet convenience of rushing you the things your lazy ass buys online. Your case in point for this: Amazon Prime's drone program.

Amazon proudly proclaims that, once operational, seeing their fleet of Prime Air vehicles in action will be “as normal as seeing mail trucks on the road.” While they’re not a direct threat to deliverymen and women just yet, once the FAA regulations are cleared and the robots themselves are functional (Amazon assures their customers that they are currently “testing many different vehicle components, designs and configurations”), the obvious idea is to make delivery drones the norm.

The company encourages people to apply for positions surrounding Prime Air — specifically engineers and research scientists. This makes it sound more like NASA than the postal service, and quite unlike the U.S.P.S. or FedEx, not a fertile place for a blue-collar worker to build a career.

It’s also expensive. Each drone costs anywhere between $105,000 to $186,000 per year, which dwarfs the annual $38,465 salary for a FedEx driver or the $58,653 for a UPS driver. Still, the multi-billion-dollar investment could save Amazon some cash in the long run. Over the past four years, Amazon has lost $8.8 billion in shipping costs, but an army of drones could drive down the average per-item shipping cost as low as two bucks. The sacrifice, for that cost, is the human element at the point of delivery (a UPS dude in mid-length shorts bounding to your door still has an old-fashioned charm) and the fact that, well, there goes another real-live worker's job.

I asked a FedEx driver how a mechanical fleet like the one Amazon wants to build could blow up his job. Instead, he's already thinking of how to team up. “They’re pretty cool," he said, "and could be very helpful in the future.”

To be fully replaced by flying bots? Impossible, he said, so long as you want to keep up a basic level of customer service. “There are a lot of circumstances that come into play when I’m delivering," he said. "It could be raining, or snowing, or maybe the dogs I encounter could pick the delivery box up and tear it apart. Sometimes a customer requests the package be placed in a garage or inside a screened door, and we’re required to log where the package was placed at when confirming delivery.”

To him, legs on the ground still trump rotors in the sky. But the best scenario for companies and for customers would be a combination of the two. “Unless some modifications were made where the drone could carry heavier packages, or be able to navigate each individual house the way the customer would like, I don’t think drones could take over my job,” he explained. “With that being said, I do think drones could be a big help when dealing with smaller packages and envelopes.” Deliverymen and drones, working together.

That progression seems to be the most likely next step as the tech evolves. UPS, for instance, tracks huge amounts of data from their drivers, to trouble-shoot and to make routes more efficient. Drivers have handheld computers to organize package orders, while sensors on their trucks track delivery times. Our FedEx driver said that once his truck is loaded, he's given a route that has him delivering, on average, a package every two minutes.

That kind of productivity owes to a collaboration between humans and computers. Collaboration with delivery drones is further off. At this point Amazon drones can only carry items up to 5 pounds within a 10-mile radius of a warehouse. Delivery companies still need those legs on the ground, and may continue to, no matter how sturdy drones get.

More like this
Innovation
11 hours ago
Can cars run on water? The science of a TikTok conspiracy theory, explained
By Andrew Moseman
Innovation
6.27.2022 8:00 PM
Artificial photosynthesis can grow plants without light — and may solve a planetary dilemma
By Steph Lee
Innovation
6.25.2022 10:00 AM
9 veggies that are healthier cooked than raw
By Laura Brown and The Conversation
Share: