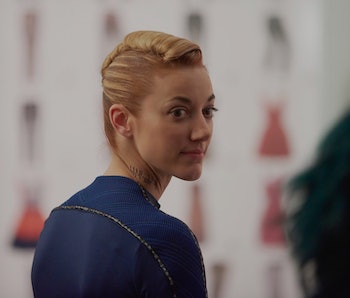 Stopping into a remote space station to pick up medical supplies in the hopes of reviving Six (Roger Cross), the crew is quick to split up. Arax Nero (Mike Dopund) is making the moves that will inevitably get him either killed or expelled from the Raza. Three (Anthony Lemke) hooks up with some old buddies ready to offer him a glimpse into his extremely messy childhood. It’s the Android (Zoie Palmer), however, who steals the show. Joining Five (Jodelle Ferland) and Devon (Shaun Sipos) on a supply run, the Android finds herself tagging along with a man who will force her to confront a dilemma that’s been brewing fiercely in her mind since the pilot.

Of course we’ve seen the the robot with emotions plot before, scads of times, but the journey undertaken by Dark Matter’s Android gets lots of credit for daring to ask the question of whether or not being a human is a good thing.

I guess when you’ve got Three as an example of the species, that’s a totally valid question to ask.

The Android is a Robot First and a Human Second

Throughout the series, the Android has maintained that her burgeoning emotions were a flaw in her design. Though the crew doesn’t seem to give her feelings a second thought, the Android has always struggled with them. In season one, not only did she ask pretty much every crew member if she should reset herself, she went to the trouble of creating a hologram whose sole function was to determine whether or not her “design flaws” compromised her ability to perform functions for the crew.

At no point in her history has the Android expressed a desire to be anything more than high-functioning property. Unlike Next Gen’s Data, for example, the Android isn’t a huge fan of her feelings; she keeps them around out of sheer curiosity, vaguely enjoying the sensation of being unique while beset with anxiety over the potential vulnerability their presence represents.

And Then a Boy Comes Along

In the latest episode, “We Were Family,” the Android takes a trip port side in order to observe humanity. In addition to getting some creep points by spying on people’s PDA, the Android comes into the company of a secret group of renegade Androids, upgraded models who’ve hidden their robotic origins from the people around them. Their goal is to simply live normal lives as thinking, feeling humans.

The Android is once again at odds with those whom she has been surrounded. Though, with the exception of their leader, an android named Victor (Brendan Murray), the undercover robots are on the opposite end of the spectrum from the Razas welcoming crew. They deride the Android for being subpar machinery, a robot so old she can’t possibly have the right upgrades to simulate emotion or spark a survival response. Once again, the word “malfunction” is floated as a general description of the Android’s state of being.

Science ultimately contradicts that false assumption, though, as Victor reveals to the Android that her “condition” is intentional. Someone programmed her to feel things. The revelation is topped off with a quick kiss with Victor, an act that serves to show us that the Android is beginning to appreciate the emotions bubbling up inside her.

As the crew of the Raza heads out into space, the Android is seen holding up a gift from Victor, an implant that can help her more accurately simulate human behavior. Again, indecision plays out across her face as the Android considers what it would mean to fully embrace the sliver of humanity inside her.

It’s a rare moment in a sci-fi series when the robot pauses before taking the human leap. So often the idea of humanity is represented as the pinnacle of a robot’s achievement that it’s refreshing to see that the Android is not only reluctant to become human, she’s almost proud of being something that’s just shy of one.