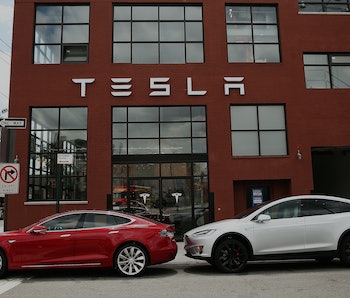 Elon Musk has a big new idea: get people’s cars to earn them money. With the progress being made toward self-driving vehicles, Musk has outlined a vision of a world where cars drive themselves around ferrying passengers. Owners will tell their cars when they’re not needed, like at night, and they’ll make their own way around earning cash.

“You will also be able to add your car to the Tesla shared fleet just by tapping a button on the Tesla phone app and have it generate income for you while you’re at work or on vacation, significantly offsetting and at times potentially exceeding the monthly loan or lease cost,” Musk writes in part 2 of his Tesla masterplan, which among other ideas, announces that Tesla pickup trucks are coming as are Tesla city buses.

But back to the ride-sharing: Musk believes that this will help to lower the cost of Teslas to the point where nearly everyone could purchase one (Imagine!). The company estimates that consumers use their cars for only five to 10 percent of the day, leaving ample time for passenger deliveries. Cities without enough volunteer car owners will receive special fleets of cars from Tesla to make up the deficit.

Tesla has been focusing hard on getting electric car ownership down to affordable levels. The company’s Model 3, available for $35,000, serves as an entry-level model for budget-conscious buyers. That still places it head and shoulders above the cost of a used car from a dealership, so Musk’s sharing proposal could pull prices down further for consumers willing to let strangers ride in their cars during the day.

If the ride-sharing idea doesn’t pan out, maybe that Tesla bus plan will: envision a world where self-driving urban transportation vehicles ferry riders directly to their destination, hailing the bus from a smartphone.