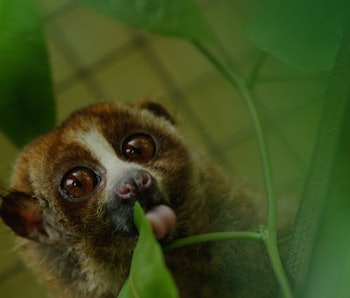 Animals in nature don’t just know how to seek alcohol. They know how to seek strong alcohol. A study published Wednesday in the journal Royal Society Open Science shows that certain booze-seeking prosimian primates — the researchers looked at the legendary slow loris, of YouTube fame, and freaky-looking mammals known as aye-ayes — don’t just identify alcohol in fermented fruits, saps, and nectars but selectively choose the foods that contain the most booze.

In nature, aye-ayes — nocturnal lemurs from Madagascar — normally dig for dinner by pulling grubs out of rotting tree trunks, but when those aren’t available during the rainy season, they get much of their nutrition from the nectar of a plant known as the traveler’s tree. It’s hypothesized that said nectar occasionally grows old and ferments, producing ethanol. The researchers at Dartmouth University who carried out the study found that aye-ayes carried a genetic mutation that allowed them to rapidly digest alcohol, leading them to ask whether aye-ayes were actually drawn to alcohol, or whether this mutation was just an evolutionary quirk. After all, what advantage would this mutation have conferred, if it weren’t for the fact that this species was into getting lit off traveler tree liqueur?

Taking two aye-ayes named Morticia and Merlin, together with Dharma, a slow loris — a related species known to drink fermented nectar in the wild — the researchers conducted a battery of experiments in which the party animals were given a choice between a flight of simulated nectar samples containing varying concentrations of alcohol, ranging from zero to five percent. Morticia and Merlin participated in two trials a day for 15 days, while Dharma took part in five trials.

At the end of the experiment, the researchers’ predictions were confirmed: The aye-ayes were sensitive enough to alcohol that they could tell the difference between plain water and boozy nectar, and on top of that, they preferred to drink the most alcoholic liquids available. And they didn’t just drink it — they continued feeling around the containers in search of more booze. The same went for Dharma, the slow loris, though she didn’t complete enough trials for her data to be considered statistically significant.

While the study wasn’t designed to show that animals — they’re just like us! — are just a bunch of lushes, it did provide evidence that fermented, boozy foods were important, in some way, to prosimian primates, our distant ancestors. It’s thought that these species ate a lot of half-spoiled, fermented fruits on the forest floor as part of their diets, an eating behavior that helped prepare them for the Neolithic Revolution, when humans began cultivating crops — like barley and hops — for beer.

More like this
Science
Oct. 5, 2022
The secret to saving our planet may be lurking in the dirt under our feet
By Tara Yarlagadda
Science
Oct. 1, 2022
Ancient humans forged hybrid species at critical periods in our evolution
By Penny Spikins and The Conversation
Science
Sep. 25, 2022
Why do cats love cardboard boxes? Pet experts decode the obsession
By Tara Yarlagadda
Related Tags
Share: