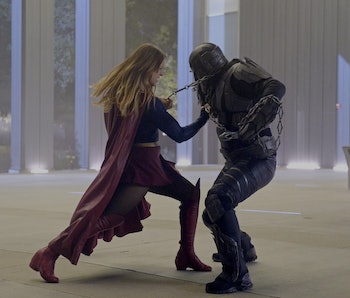 When Kryptonians are in Earth’s atmosphere, their bodies don’t obey the natural laws of physics. Powered by our yellow sun, Superman and Supergirl can fly through the sky, shoot lasers from their, and crush steel with their pinky — all of which results in a ton of property damage that looks great on TV and film.

Hand-to-hand combat for these superheroes shouldn’t look like a kung-fu movie, but when they’re up against enemies capable of the same freak physical feats, they wind up acting like Jet Li with jet packs. In the first season of Supergirl, Glee alum Melissa Benoist suits up as Kara Zor-el to save National City and the world from alien threats. And she does it with (mostly) her fists.

While there is ample use of CGI and green screen effects, some of the fights in Supergirl still manage to impress with practical stunts and smart choreography. Chiefly directed by David Wald (currently helming his own indie action flick, The Order), 20-odd episodes of Supergirl on CBS boast a lot of good old fashioned brawling. After combing through all of them, here are the top fights in Supergirl.

Kara’s first fight with Red Tornado — a combat android meant to rival Supergirl — was a formidable opponent Kara could knock the lights out without worrying about actually killing someone. While the second fight later in the episode is a more satisfying climax for Kara’s arc, their first brawl is just a cool spectacle given the show’s infancy and the known restrictions TV has towards elaborate special effects.

A lot of it is just jabs from Kara at a keeling Red Tornado, but using her ice breath to freeze his arm is a neat trick.

4. Supergirl vs. Reaction, in “Fight or Flight”

While this fight relies on even more CGI than in Kara’s fight against Tornado, her brawl against Reactron is especially cool — especially Reactron’s sick punt kick that sends Kara a hundred yards smashing into a column. Pretty cool.

3. Supergirl vs. Alex, in “Better Angels”

Though the scene works in large part due to the resentment that was built up between the characters throughout the majority of the season more so than its choreography, it’s still pretty badass that Alex rocks a Kryptonite sword against her adoptive sister. Weapons like the Kryptonite sword make for interesting storytelling in fight choreography — this is what made Mad Max versus Furiosa so much fun in Mad Max Fury Road — and it’s really fun to see Alex try to kill Kara with the one thing that would, you know, actually kill her.

2. Supergirl and J’onn vs. Non and Indigo, in “Better Angels”

This fight is awesome! The season of finale of Supergirl was a triumph for the freshman series and this tag-team match between Supergirl and the Martian Manhunter against Non and Indigo managed to be way more entertaining than the entirety of Man of Steel.

While it didn’t perfect the troublesome “fly fighting” that Zack Snyder also struggled to get right, the smaller scale made the actual brawling take up prominence on screen. J’onn splitting Indigo apart to digital pieces is legit savage.

1. Supergirl vs. The Master Jailer, in “Truth, Justice, and the American Way”

THIS FIGHT ROCKS. While there is still a ton of CGI because of the Master Jailer’s powerful chains, it’s the one fight where Kara really embraces fisticuffs and the use of a chain to hold her down was brilliant. “Truth, Justice, and the American Way” is one of the weaker episodes of the season, but it’s saved by Kara’s one-on-one brawl against the Master Jailer.