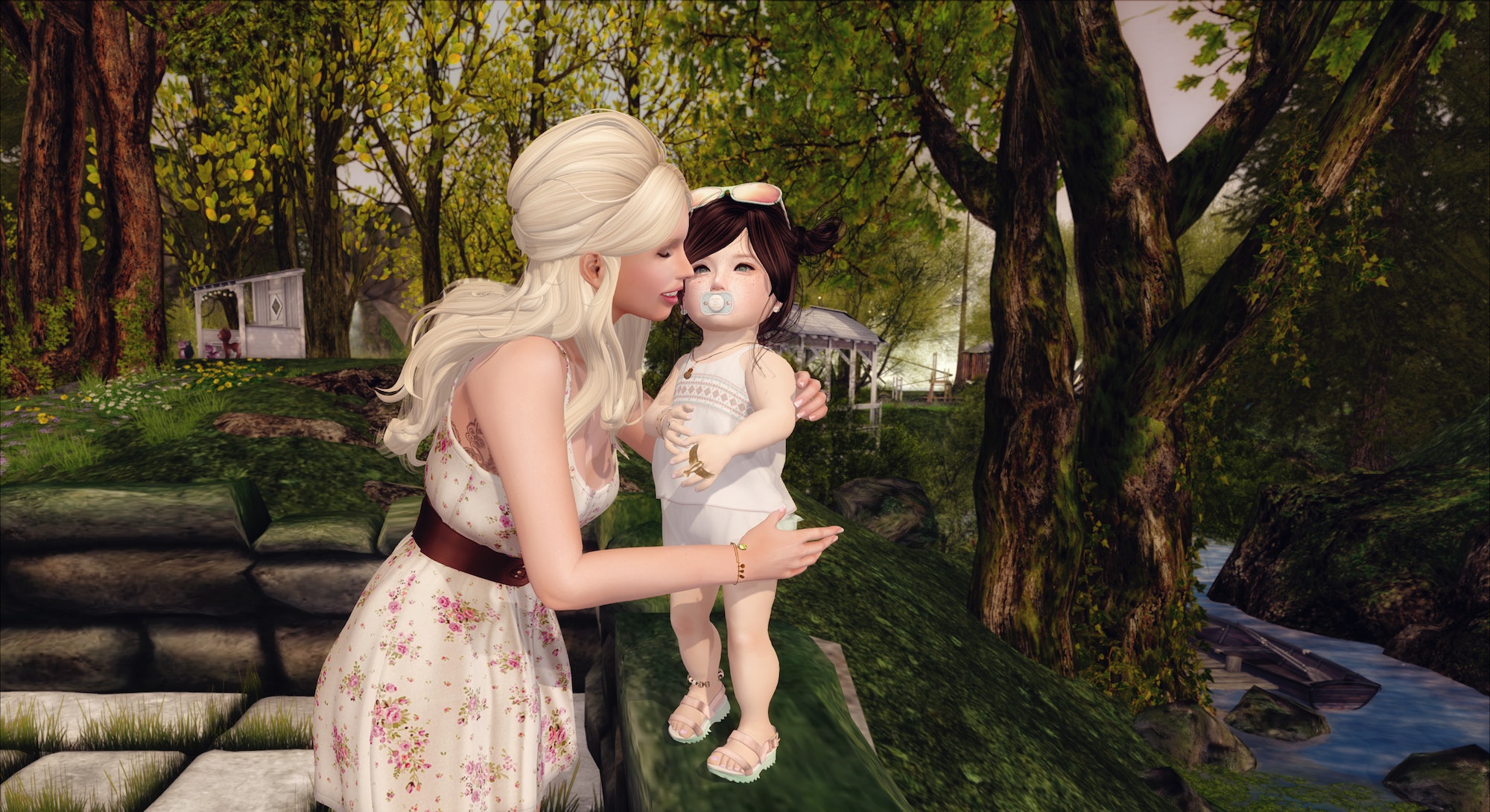 Avatars have long had a role in presenting ourselves to the world in an alternate virtual universe where we could tweak ourselves and become very different characters from our real lives.

For 13 years, Second Life has given its users the freedom to live digitally. This seemingly unlimited and highly customizable virtual world allows people to build, modify, and socialize elaborately differentiated avatars. There are humans, sure, but also vampires and cyborgs and sexy aliens (there are always sexy aliens).

The idea is that users or players can exist on their own terms within a non-biologically determined universe. And what do people do with that freedom? Many of them follow Peter Pan’s famous mandate: “Never grow up.”

Second Life has child avatars. And while it is by no means required or necessary, many of these child avatars are virtually adopted into families with other SL users serving as surrogate parents. The rules set out by SL developer Linden Labs don’t demand that in-world children be operated by real-life children. Most aren’t. Most are adults pursuing a rather unique emotional agenda. Researchers Katherine Loveland and Richard Gilbert have focused a great deal of energy on figuring out exactly what that agenda is.

Loveland, a clinical psychologist and professor at the McGovern Medical School at the University of Texas Health Science Center at Houston, and Gilbert, a professor of psychology at Loyola Marymount University, are currently working on an expansive research project looking at why adults choose child avatars and why users choose to build virtual families. It’s unexplored territory — as far as Loveland and Gilbert know, this is the first study to examine these choices.

“It’s something that I’m interested in because I find virtual worlds to be, in a way, the world’s largest projective test,” Loveland tells Inverse. “People bring themselves to it, and they build what they want there in a user-created world. They are what they want to be.”

Gilbert and Loveland aren’t finished with the analysis of their research — Loveland says it will likely be completed over the next year — but a definite consistency is emerging. Many SL users they have interviewed use child avatars not because of a perversion or just because it seems like a silly thing to do — they use child avatars because they want to be children. They want a do-over. And they do so within families that operate like a regular one would, with a mother, father, and siblings — a far cry from the world of “whoring, drinking, and fighting” SL has been made out to be.

The exact why people are looking to live as children, and tangentially why other users what to act like their parents, is what more analysis will reveal to Loveland and Gilbert before they can make any definitive claims. But they do have a research-supported hypothesis, which was recently presented to the Western Psychological Association.

“The hypothesis is that both the child and the parental avatars are motivated to explore these roles as a kind of corrective emotional experience,” Gilbert tells Inverse. “This may be because of traumatic or difficult experiences in childhood, so that in effect both child and parental avatars are trying to recreate a family that would be a more positive, and hopefully healing, experience.”

To determine this, Loveland and Gilbert have collected data from over 100 child avatars, over 100 parental avatars, and a control group of people who are active in SL but have never done any family role-playing. Within surveys about their experience in SL, users also completed an assessment called an Early Trauma Inventory Self-Report, which is widely used by psychologists to assess various types of early abuse and general trauma. The questions examine what might have happened to you as a child and how negatively you feel it affected you.

Getting the data wasn’t easy.

“This is the first series of research studies that’s ever been done with this population and when we got into it, and tried to collect some data, we realized why,” says Gilbert. “And that is because there is a lot of mistrust, especially among the child avatars, that social scientists and people will look at them and assume their motivation is some kind of experimentation, or something with child sexuality or pedophilia. They are understandably not very comfortable with this kind of scrutiny.”

So Gilbert and Loveland decided to gain their trust from the inside: They formally hired Whisper, a SL participant who uses a child avatar, as a research assistant. She was their point of entry to this population, a well-respected user who could vouch that the researchers weren’t trying to put child avatars on display as deviants.

Ownership and explanation of being a child avatar isn’t just a delicate situation when it’s a SL user speaking to a non-user — child avatars face a considerable amount of skepticism, and sometimes outright anger, from other avatars within the SL community. On a SL community board, user kiskoshka, who says that her child avatar is her “inner child’s free expression,” expressed her frustration:

“About 80 percent of the time, I play my avatar as a child — and I can’t even begin to express the tremendous hurt and frustration I feel over the discrimination and prejudice against child avatars that is absolutely rampant in SL. It happens a dozen times week; I was recently told that a woman wouldnt sell me a prefab house because my child avatar offender her … Why??? I’m sorry, but I see absolutely no difference between this type of discrimination and the times I’ve been discriminated against (very, very few) due to my ethnicity in RL.”

But the complaints against child avatars are rampant on community messaging boards and other forms of internet discourse, like the Reddit thread on banning child and teenage avatars. Comments like:

It can’t be ignored that in a conversation about children and the internet, the topic of sexual perversion is going to come up.

Linden Lab does explicitly ban any sexualization of child avatars and Gilbert says that many jurisdictions around the world consider that sexualization a form of child pornography and a prosecutable offense. But Loveland says the child avatars she has spoken with say that they aren’t doing it for sexual reasons; if anything, it’s the opposite.

“One of the problems that Second Life and other virtual worlds have had to deal with is the fact that there is potential for child abuse to go on,” says Loveland. “So they have quite strict rule about that and people who are users there feel strongly about it. I’ve known quite a few people who have child avatars — they aren’t doing it for sexual reasons, unless it’s perhaps to avoid being approached sexually. Although many of them have told me that they have been approached sexually at one time or another as their child avatar.”

Now Loveland and Gilbert are in the analysis stage of also examining whether trauma influences people to choose to be parents, and if this trauma is similar to that of users who are child avatars experienced. So far, they have determined that those who are child avatars are people who had a higher degree of early trauma symptoms — and importantly, reported this — although parent avatars were not far behind.

Whether having a SL family is fulfilling participants’ deep, emotional needs is still to be determined. So far the data shows that virtual families are pretty similar to real ones — some are deeply satisfying, and some volatile.

Gilbert and Loveland continue to examine this relationship, formed by natural phenomena, to test whether it is a good idea or more damaging. What is determined will provide the basis of how best to help. Studies show that avatars are the foundation for the feeling of immersion within a virtual world — the question is whether they can help people immerse themselves in the real world, too.

“My real motivation for doing this is to not only understand what goes on in virtual worlds — although that is very interesting — but because I really feel that with virtual reality we have a tool that can be used in more ways than we are currently using it,” says Loveland.

“There is already a growing literature in the use of virtual reality to treat various disorders but I think that there may be many other ways of using it. The fact that people self-select to do things like becoming a child, to be taken care of by somebody else, to not have adult responsibilities — those are not how an adult generally behaves and tells me that the person has unmet needs as a child. I hope to find out whether a therapeutic VR intervention here is a good idea.”