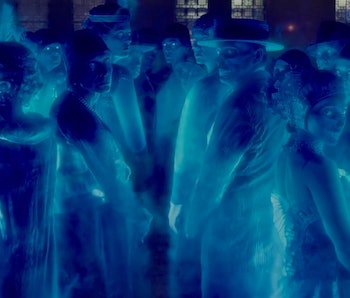 (Before you go any further, beware! We’re about to get into one of the major plot points of the new Ghostbusters film, releasing Friday. Consider this your requisite spoiler alert.)

You’ve just seen Ghostbusters. You walk out of the movie theater and you’re struck with a burning question: What the fuck are ley lines?

In the film, they’re essentially lines that cross the Earth, acting as the gateway between our world and the ghost world. Villain Rowan North figures out how to crack the dimensional divide by placing a machine where two major ley lines intersect. This crossing happens in the scariest part of New York City: Times Square.

The plot point takes inspiration from the real-world debate over ley lines. And by debate, we mean a raging conversation about four distinctly different opinions. Paranormal enthusiasts, extraterrestrial theorists, New Age historians, and university-backed archaeologists all have a different take on what ley lines are — and do — in this world.

The supposed origin story of the term ley line is that one day in 1921 businessman and amateur archaeologist Alfred Watkins had a revelation standing on a hillside, overlooking Herefordshire, England. He noticed that the rural countryside he was staring at had a number of ancient sites, old settlements, and places of worship, and he noticed that these sites seemed to be arranged in straight lines. Watkins later grabbed an Ordinance Survey map, pored over it, and realized that — as told by professor of archaeoastronomy Clive Ruggles — “the apparent existence of numerous ancient straight trackways formed a network of intersecting straight lines stretching from one end of Britain to the other.” Many of these places’ names had the syllable “ley” within them, so he decided to call these tracks ley lines.

In his book Early British Trackways, Watkins argues that these lines, which he also claimed were oriented in the direction of the sunrise and sunset at the solstices, likely were placed there to serve a spiritual purpose. These sites must be those of scared power, he mused, or they wouldn’t have been placed in this exact arrangement.

Archaeologists then (and archaelogists now) dismissed this theory as an unfounded theory. Later analysis by archaeologists Tom Williamson and Liz Bellamy examined the lines between archaeological sites in the United Kingdom and found that it wasn’t so much that they happened to line up — the density of these sites was just so much that drawing a line anywhere would connect you to a number of sites.

“Ley lines do not exist,” writes archeology professor Matthew Johnson in his book Archaeological Theory: An Introduction. “I would argue that if we really want to understand what drove and continues to drive the ley line debate, we have to look, in part, at class divides in British archaeology.”

Johnson’s argument points to the fact that many people have simply chosen to believe ley lines do exist — in a sort of wake up sheeple way, they don’t think university archaeologists are being open-minded enough. Alternatively, it could be argued that that those who do think ley lines are real may be subject to a very real, cognitive habit — the brain looks for patterns to make sense of the world, even when patterns aren’t there.

Regardless, ley lines continue to be appropriated by two more groups: people who think aliens have already visited Earth and people who believe in ghosts. “Ancient astronaut” (aka aliens) theorists think that ancient monuments are actually a secret code laid out by aliens. This secret code is made up of energy lines, or, ley lines. Some theorists say ley lines are “created through cracks in the tectonic plate” and emit magnetic energy. There is no scientific evidence for this to be true.

For paranormal enthusiasts, ley lines are also an altered form of the planet’s magnetic field. It’s this energy, theorists argue, that causes a rise in paranormal activity.

If you care less about scientific accuracy and more about amateur ghost hunting, then you might want to pack up your proton pack, figure out where some famous landmarks line up, and check it out for yourself.

More like this
Entertainment
5.18.2022 10:00 AM
Andor will bring the best part of Rogue One back to Star Wars
By Alex Welch
Entertainment
22 hours ago
10 years ago, Rihanna made a terrible sci-fi movie — and launched an even worse Hollywood trend
By Mónica Marie Zorrilla
Entertainment
21 hours ago
15 years later, Doctor Who will (maybe) fix its biggest mistake
By Ryan Britt
Share: