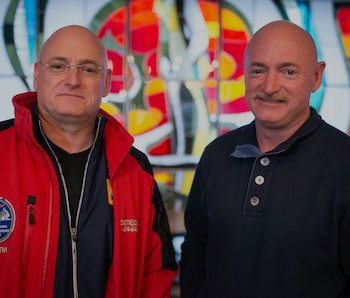 Retired NASA astronauts (and twins) Scott and Mark Kelly were arguably the biggest guests invited to speak at the opening day of the International Space Station R&D Conference 2016 on Tuesday. The pair were joined by neurosurgeon and media personality Sanjay Gupta to discuss Scott’s completion of his Year in Space mission aboard the ISS, and the brothers involvement in NASA’s “Twins Study” — both of which aim to unravel what the effects of long-term duration in space might have on humans.

“I’m feeling pretty good,” Scott told Gupta and the audience at the conference.

It’s been three-and-a-half months since his return to Earth, after having spent 340 consecutive days in orbit and 520 total (more than any other American in history). Scott came back to this planet two inches taller, with poorer eyesight and a smaller heart, among a few other noticeable changes and a slew of less tangible ones. All astronauts go through lingering effects after getting back from space, he reminded the audience — his case was just a more extreme form.

And that was the point. NASA conducted the Year in Space mission precisely so they could put a human through the rigors of a confined microgravity environment for more than just a few weeks. The goal is to figure out what problems set into the human body — both physically and cognitively — in order to prepare future astronauts for travel to Mars and other worlds.

Throughout the whole thing, Scott was getting regular measurements of his vitals and sending the data back to Houston, as well as taking samples of his blood and other fluids and sending those vials back to Earth on during return trips for ISS resupply missions.

But that was just one side of the mission. The fact that Scott and Mark are identical twins — and therefore genetically exactly the same — presented a unique opportunity: It provided a control for the experiment for which NASA could compare the environmental effects and determine precisely what kinds of changes caused by long-term space duration may have an underlying genetic cause.

So while Scott was in space, brother Mark, who had already retired from space travel for NASA (Scott followed suit after he came back from the ISS in March), was back here on Earth, also getting studied by NASA. “While he was up there in space, I was the lowest-paid government employee,” Mark joked.

The Twin Study may not have actually happened if it weren’t for Scott posing an innocent question. See, a government employer is not allowed to ask its employees to take a genetic test of any kind. So NASA couldnt outright ask Scott if he — or Mark — were willing to undergo this type of testing for a research investigation.

When Scott was being vetted for the Year in Space mission, he simply asked whether a comparative study between him and Mark would be a possibility. The answer he got was that NASA wasn’t looking into it at the moment — BUT, would he be interested if that was a possibility?

“Me asking that question gave that opportunity to NASA to approach the researchers to see if there was interest,” said Scott. He inadvertently opened the door to what is arguably the most important scientific study with regards to human space travel.

That’s not an exaggeration. Make no mistake, although NASA doesn’t articulate this, the long term goal is and always will be “to settle on other planets and explore the galaxy,” said Andrew Feinberg, an epigeneticist at Johns Hopkins University who’s involved with analyzing the Kelly’s biological samples. The success of future space exploration depends as much on the technological side of things as it does on the biological.

So what have scientists found so far? Unfortunately, they’re still poring over the data and analyzing it, and that’s long, arduous work. But a full paper detailing the scientists’ findings will be published sometime in 2017.

Feinberg did mention that the study already demonstrates the capability of humans to conduct genomics. He went so far as to say Mark and Scott were responsible for inaugurating “the era of space genomics.”

Meanwhile, the rise in private spaceflight conducted by companies like Blue Origin, SpaceX, and Virgin Galactic raises the possibility of space travel opening up to more and more people. Mark was effusive about the prospect of reusable rockets being the new standard of space launches. “It’s really going to change things moving forward,” he said, saying other countries would have a tough time competing with the U.S. thanks to these innovations.

Does that mean he or Scott would ever consider flying into space as private citizens? For both brothers, it’s entirely possible.

“I really miss it,” Mark told the audience. “It’s just an incredible opportunity. I would climb into the Space Shuttle in a second.”