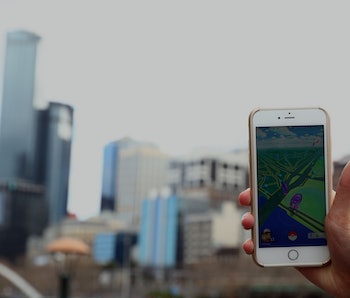 Couch potatoes beware: Using a GPS spoofer to trick Pokémon GO into thinking you’re somewhere other than your living room probably won’t end well for you.

One of the key aspects of Pokémon GO is exploring new areas to find Pokémon that can’t be found elsewhere. The problem is, that also means it’s not a game you can play from the couch — until now, at least. A new spoofing tool called the Pokemon Go Controller lets players explore other areas by manually changing the GPS location of their character, so you can walk down the street in the game without actually moving in real life.

Pokemon Go Controller works by turning one iOS device into a virtual gamepad for another iOS device. Instead of moving around by actually putting one foot in front of the other, the tool makes Pokémon GO feel more like a traditional Pokémon game in which you’re controlling an on-screen character with a long series of button presses.

There are a few problems with that setup. The first is that Pokemon Go Controller requires its users to familiarize themselves with Xcode, the tool used by app developers working on Apple’s platforms. Most people shouldn’t fuss around with using Xcode, especially if it’s just to cheat at a Pokémon game, because it’s a powerful developer tool that isn’t exactly user-friendly. And even if you’re truly committed to taking a sedentary approach to the game, Pokemon Go Controller has a second major problem: it can get you banned.

The application uses a GPS spoofer, which is definitely against Niantic’s rules. Players who have used tools like Pokemon Go Controller say that, when they are discovered, they are no longer able to interact with anything — Pokémon, PokéStops, and gyms — for a few hours.

Still, it’s easy to see how Pokemon Go Controller might tempt people. Pokémon GO can be hard to play in rural areas and the game often sends people to places where they probably shouldn’t look for Pokémon.

You just have to ask yourself: Are you comfortable using a tool like Xcode? And are you willing to risk getting banned from Pokémon GO, if only for a few hours, in your efforts to catch ‘em all? If the answer to either of those questions is “No” you should probably just catch Pokémon the good-ol’ fashioned way. If you want to risk it, though, you can’t say you weren’t warned about the consequences.

More like this
Entertainment
6 hours ago
You need to watch the scariest movie of the 20th century before it leaves Netflix this week
By Eric Francisco
Entertainment
1 hour ago
Doctor Strange 2 director just revealed a huge Fantastic Four casting spoiler
By Alex Welch
Entertainment
33 minutes ago
How the next Star Wars show can fix Obi-Wan Kenobi's biggest mistake
By Dais Johnston
Related Tags
Share: