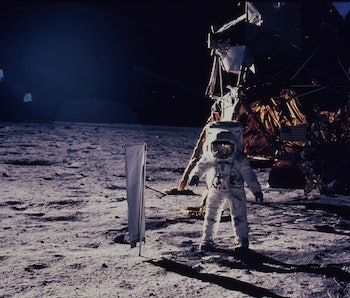 In a fun bit of software archaeology, former NASA intern Chris Garry uploaded the entire Apollo 11 flight guidance source code on GitHub. While the source code has been available for some time, its appearance on GitHub ensures a huge audience of coders and enthusiasts. The Apollo 11 source code has quickly become a fun window into the world of computer programming in the 1960s.

As Quartz exhaustively points out, the technology to program a sophisticated bit of spaceship navigation didn’t necessarily exist in the ‘60s, so MIT programmers had to create their own. Utilizing something called “Rope Memory”, coders created a special variation of assembly programming. Assembly itself is another obscure bit of coding that is not very prevalent today due to its difficult comprehension.

Code enthusiasts have quickly come to discover a trove of jokes made by the early programmers during the coding process for the Apollo Guidance Controller (AGC). Reddit users on the subreddit r/ProgrammerHumor have discovered that several comments for lines of code often devolve into silliness. One file labeled BURN_BABY_BURN—MASTER_IGNITION_ROUTINE has an opening comment that explains the pop-culture history of the actual phrase.

That’s not all, however. Further comments include casual back and forth between MIT coders, and one lyrical nerd even snuck in a little Shakespeare. Perhaps these clever comments are the reason why the director of software engineering, Margaret Hamilton, is dwarfed by the collected tome of code.

The code for the command and lunar modules have actually been available since 2003, when researcher Ron Burkey transcribed every bit of code by hand. Now, with an army of internet savvy coders scouring each line of code, we’re sure to get more internet ready humor bits, instead of the AGC simulator Burkey made with the code.