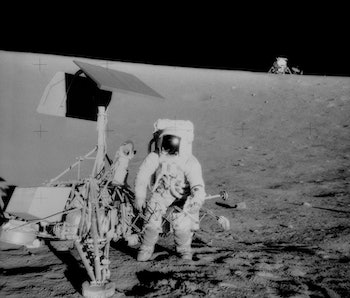 Fifty years ago this week, the first American spacecraft land on the Moon.

Surveyor 1 launched aboard an Atlas-Centaur rocket on May 30, 1966, just three days before touching down on the moon where it would snap the first images ever recorded of the lunar surface. In its lifetime, the probe would return over 11,000 television-quality images of the moon to Earth. Although few are publicly available, they all maintain an eerie quality, with some featuring black shadows from the spacecraft casting down on the gray, lunar surface, their corners inviting our imaginations to see things that are not there.

Surveyor 1 reached the moon four months after Luna 9, a Soviet lander, touched down and transmitted the world’s first images from the lunar surface.

Before the Surveyor missions began 50 years ago, the best images ever taken by American spacecraft of the moon had come from the Ranger probes, which captured a few shots each as they hurtled to their destruction. The Ranger spacecrafts had made no attempt to land, and so Surveyor 1 was also the first probe to test the technology that would make it possible for astronauts to touch down on the moon a little more than three years later. Its successful first landing paved the way for additional Surveyor missions, which would provide the first soil analysis on the moon and enhance NASA’s mapping of the new lunar world.

One of the most important objectives of Surveyor 1 was to ascertain information about the surface of the moon itself. Equipped with mechanical sensors, Surveyor 1 was able to determine the load-bearing strength of the lunar surface, allowing engineers on Earth to design more effective landing craft in the future. It also measured the temperature of the ground to help future Surveyor missions optimize their investigations of the soil.

Surveyor 1 would remain active for a little over a month. Surveyor 2 actually crashed during its approach to the moon in September, 1966, but Surveyor 3 touched down, carrying the first sensors to test the lunar soil. An additional four Surveyor missions were attempted, and all were successful, except Surveyor 5, which disappeared shortly after initiating its descent. Surveyor 7 would be the last American probe to reach the moon before the Apollo 11 mission brought the first humans on July 20, 1969.

The Apollo 12 manned-mission to the moon briefly returned the Surveyor missions to attention, as astronauts Pete Conrad and Alan Bean were able to visit the Surveyor 3 probe on the moon’s surface. The lunar module landed just a few hundred meters from the Surveyor and could be seen in photos of the older, showing how far the space program had progressed in a few short years.

With the Curiosity rover now on Mars and NASA aiming to land astronauts on the red planet by 2030, it may seem like American progress in space is inevitable. The Surveyor missions, coming as they did several months after the Soviets had successfully landed Luna modules on the moon, should certainly stand as a cautionary tale against intergalactic hubris. Progress in space can be painstaking and slow, but also breathtaking and rapid. Advances can arrive at rocket speed. What Surveyor began for the United States in 1966 can be lost. It is up to us to keep the flight going.