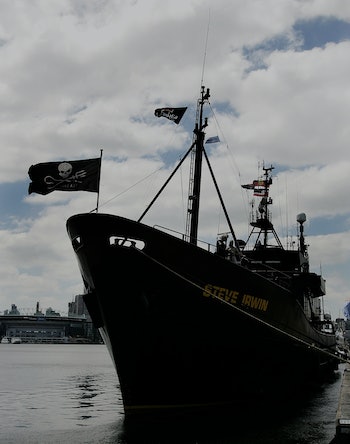 Sea Shepherd has a new, blunt, hard-hitting goal: end BP’s plans to drill for oil in the Great Australian Bight.

The organization is most famous for engaging poachers in high-speed boat chases and literally putting themselves between Japanese whaling fleets and their Antarctic catch, but this time, the plan is not to confront the oil giant directly — at least not yet. Instead, the group will launch their flagship SSS Steve Irwin on a sort of nature tour, to show Australians and the world what would be lost if oil was spilled in that remote part of the world.

But that doesn’t mean it won’t be exciting, campaign leader Jeff Hansen tells Inverse. “There is that excitement when you’re on the poachers — I’m sure that will be missed to some level. But I think, very similar to when we’re going to Antarctica, you’re absolutely just smacked with nature in the face,” he says.

“What’s at stake is a wilderness of global significance,” he continues, emphasizing this current battle might have more consequences than their previous ones. “We are talking about blue whales, sperm whales, humpback whales, minke whales, southern right whales. It’s the biggest southern right whale nursery in the world — at the head of the bight.”

BP hopes to begin exploratory drilling late this year. It has submitted plans to the branch of Australia’s government that regulates safety and environmental concerns of offshore drilling. The agency has twice asked for revised environmental plans, “which is not a rejection but another step in the normal, iterative process with this regulator,” according to the company.

“If there was a spill, it would be impossible to clean up. That coast is so remote. You’ve got high cliffs, big seas, rough seas — and it’s clear that with the recent spill in the [Gulf of Mexico] by Shell, it’s not a question of if there would be a spill in the Great Australian Bight, but when.”

The bight is a massive bay that spans a great section of the southern coast. It’s well-named; it looks as if some enormous creature has taken a bite out of the continent. Hansen is hoping to avoid a fate like that of the United States’ southern coast after the Deepwater Horizon oil spill. “Six years on, the gulf is still a mess. There are still millions of barrels of oil sitting on the ocean floor, fisheries have not recovered, the people are still struggling in that vicinity, and scientists are coming out with reports of dolphins giving birth to stillborn calves.”

The hope for this campaign is to gather a (literal) boatload of journalists, celebrities, and volunteers to document the wildlife of the bight and show it to the world. “When we showcase and see the beauty of the Great Australian Bight — the landscapes and the incredible abundance and biodiversity there — then the crew and everyone will be like, ‘How can BP even consider putting this at risk?’” says Hansen.

It’s a tactic that’s worked before, he says. In 2012 Woodside Petroleum had plans to build a massive liquefied natural gas plant on the western coast of Australia, right in the middle of a humpback whale nursery, says Hansen. “Our mission there was to showcase, once again, what we would all lose if they were to put this gas hub right through the middle of the nursery.” He said on their first day out, the campaigners counted more than 100 whales, disproving the company’s claims that whales stayed further out at sea.

“That was heavily backed and supported by the government of Western Australia at the time. They had spent $50 million on the project, and they had created a massive footprint on where they wanted to put the gas hub. And I remember being up in the helicopter with Bob Brown, and looking over at the site, and going, ‘Bob, geez, they’ve spent a lot of money on this project already. Can we win this one?’ And he said, ‘It’s nothing for these companies to spend the money and walk away, with enough pressure.’” The company later shelved the project, citing gas prices that were too low to make the plant financially viable.

“We know that this style of campaign can put pressure on, if it goes global,” says Hansen. “We have to do everything we can to stop BP. I believe we can win this one, and it’s a battle — and a victory — we must win, but we need to get the world on board.”

The campaign will also highlight the connection of the Mirning indigenous people to that part of the world, says Hansen. Bunna Lawrie and two other Mirning elders will help lead the trip. Lawrie tells of how all the whales who travel to that part of the world do so in honor of a great white whale who once came to Earth and gave life to all things. The campaign is named Jeedara for that whale. “It’s a part of telling their story, about their connection to country and connection to ocean, and the Great Australian Bight that goes back 45,000 years.”

Hansen will lead the campaign, which is scheduled to set out from Williamstown, near Melbourne, on August 5. He admits he will miss his small children left behind at home, but Hansen insists it will be a very special trip. He traveled to the bight’s Bunda cliffs a decade ago, before he was involved in ocean advocacy, with the woman who is now his wife. “It looks like Antarctica just broke off and drifted away. It’s just incredible cliffs, 30, 50 meters high and bigger,” he recalls. “We looked down and we saw a mother and a calf — southern right whales — and she said, ‘I’m going to go back and start volunteering with that group, Sea Shepherd.’”