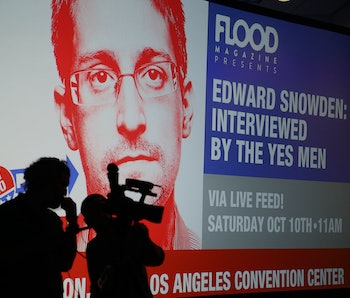 The former NSA contractor who revealed mass surveillance programs in June 2013 bounced around the globe before eventually finding asylum in Russia. Now Russian president Vladimir Putin has signed anti-terror laws that have been described most charitably as Orwellian in their nature and scope.

These new laws, which were drafted by lawmaker Irina Yarovaya, greatly expand the government’s ability to surveil its citizens and arrest them for basically any reason, whether it’s sharing any ideas the government doesn’t like or not telling police about an acquaintance’s crimes or planned terrorist plots. The word “repressive” is often used to describe them.

As it turns out, Snowden isn’t the biggest fan of the new laws. We know this because the world’s most wanted fugitive-slash-whistleblower (depending on who you ask) has been rather active on Twitter since he first joined in September 2015.

Here’s what Snowden tweeted after Putin gave the laws his signature of approval on July 7: “Putin has signed a repressive new law that violates not only human rights, but common sense. Dark day for Russia.”

Some were probably cackling with glee at that tweet. Snowden’s decision to accept Russia’s offer of asylum was met with many claims that doing so was hypocritical given that the only reason he had to seek asylum in the first place was that needed protection after he revealed invasive surveillance programs that were supposed to be kept secret. People have been killed in Russia for lesser offenses.

But that isn’t going to stop Snowden from speaking out against his protectors.

More like this
Entertainment
Sep. 25, 2022
Knock at the Cabin trailer gets roasted online for one bizarre mistake
By Alex Welch
Entertainment
Sep. 26, 2022
Christian Bale reveals the secrets of his “weird” transformation in Amsterdam
By Jake Kleinman
Entertainment
3 hours ago
Star Trek just brought back one of its most revolutionary characters — and she needs to stay
By Ryan Britt
Related Tags
Share: