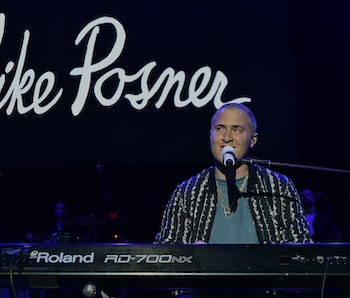 The Inverse staff looks — for its second year running — at the worst pop songs of the year so far. Let’s hope none of these persist long enough to become proverbial Songs of the Summer, though given the fact that most of them have pushed into – or maintained a position on – the Top 5 this year, we’re still going to be stuck with them for a while longer.

Mike Posner: “I Took a Pill in Ibiza”

Sarah Sloat: To know Mike Posner’s “I Took A Pill In Ibiza” is really to know two tales of this pill in Ibiza plus a lot more shitty remixes. There is Posner’s original, slow and strumming; the video is shot in gray scale so that you know this stuff is sad. Then there is the Seeb remix which got the song famous and therefore on the playlist of every bar you wish you weren’t at. Both are bad and both are Billboard-acquainted — the EDM remix was number four in May and the original is at 11 now.

Calling it the worst popular song of the year feels a bit like bullying because it’s Posner’s attempt at vulnerability — the lyrics point to his general anxiety about his self-worth. Still, it imbues a visceral need to leave any place where its playing (the same could be said about Posner’s earlier hit “Cooler Than Me”). The urban white males cry into the void is, if anything, heavy-handed and the choice to style his music video as a “Subterranean Homesick Blues” knockoff complete with soulful camera-staring pauses is straight up insulting. For all of his effort to publicly comment on his problems with narcissism, he does a pretty great job at still being narcissistic.

Ethan Jacobs: There is no denying that 19-year-old Alessia Cara has one of the most captivating voices in the game, and her vocal performance on her breakout single “Here” is a true testament to that. But the lyrics paint a picture of a whiny person who needs to hop off that high horse. On “Here,” Cara stakes her claim in music by detailing the feeling of isolation as she wanders through crowds of fucked-up people at a house party. But she doesn’t even give the party a chance, dissing everyone as soon as she walks in. She launches into complaints about the weed smoke, the loud music, the fake people, and continuously asks herself why she’s here.

Her experience is relatable, and the song rightfully applauds a strong sense of self, but there’s a time to party, and there’s a time to hang out with best friends and discuss big dreams and plans to take over the planet. In “Here” Cara comes off as the friend who tries to push every conversation or interaction into profound territory and gets pissed off when someone just wants to make small talk and enjoy a Natty Light. Since it seems no one can get on your level, how about you just leave the damn party?

Calvin Harris [feat. Rihanna]: “This Is What You Came For”

Yasmin Tayag: Here is a song that did not make its public debut audibly, but visually on Taylor Swift’s fucking back. Really, Tay, when bae asked you to parade around Coachella in a bomber jacket emblazoned with his track’s iconography, you should have known it was time to leave. There is no way a song that required this level of hype was going to be good.

And, sure enough, look at what we came for: Lazy tropical trance-pop club fodder, layered with lazy Rihanna vocals singing lazy-ass lyrics about a lazy AF metaphor that inspired a lazy as hell Girl Scout patch. Unlike Calvin Harris’s previous Riri collaborations, “We Found Love” and “Where Have You Been,” “This Is What You Came For” doesn’t even make an attempt at sonic variation; the track is 3 minutes and 42 seconds of glimmering, its only climax an octave jump 30 seconds in. It’s the aural equivalent of being Taylor Swift’s (now-ex)boyfriend: that is, smug, boring, and, above all, disposable.

Corban Goble: Despite all the attempts to rebrand the One Direction defector Zayn as the coolest artist on the planet, the first single from his solo debut My Name is Zayn and I Have Had Sex fell flat.

Neel Patel: Winston already did a pretty savage job explaining why “Can’t Stop the Feeling” is, perhaps, “the death of everything we love,” so I won’t belabor this. Ignoring the contrived inanity behind the song’s not one but two music videos, Timberlake’s first new song since 2013 sounds like the bastard child of The 20/20 Experience — 2 of 2, reusing the kind of bubblegum palette of melodies and lyrics that make me feel like he’s actively mocking my intelligence and musical sensibilities.

I got that sunshine in my pocket/ Got that good soul in my feet,” he wails. The sharp, sexy edges that made him one of pop’s best are dulled out here, as if he’s storming into a school assembly for a singalong. And I get it — the song is for a children’s movie, after all — but he could have just passed this monstrosity over to Adam Levine or something. Timberlake is at his best when his music has teeth. This is straight baby formula.

The Chainsmokers [feat. Daya]: “Don’t Let Me Down”

Winston Cook-Wilson: “It’s not even summer/ Why does the DJ keep on playing ‘Summertime Sadness’?” This is one of several attention-grabbing, aggressively topical lines from DJ duo the Chainsmokers’ polarizing 2014 breakout hit “#Selfie.” The line ruminates on a crucial, eternal mystery: What makes a pop hit stick and resonate? If you take one step back sometimes, even your favorite track can sound, if just for a second, like garbage; the strange feeling that we are living in a strange simulation takes hold. Does a song’s “power” truly exist in a vacuum? Is it “timeless,” or contingent on endless, random factors and preconditions?

The answer is definitely the latter. Yet in most pop hits, you can discern a monolithic central idea — one clearly insidious enough to ensure widespread success with focus groups and consumers alike. I do not see, however, how the Chainsmoker’s current Top 5 single made it that far. In fact, I believe it’s a conspiracy. The combination of the husky anonymity of guest singer Daya’s voice, the droning filler of a verse, the Busch League Coldplay guitar smatterings, the clap-to-climax pre-chorus… what use is this song, and indeed, anything? The rote, misplaced EDM breakdown is an aural incitement toward seppuku; the hook unfurls wispily, like a skunk’s stench through your sedan doors on some lonely stretch of interstate. Banality reigns; time trickles by.

Twenty One Pilots: “Stressed Out”

Emily Gaudette: I first heard this song while driving around New Mexico at 2am. When the main singer, named either Tyler Joseph or Josh Dun, started in on his list of wishes, delivering them in a staccato, whiny voice, two thoughts floated to the surface of my brain. The first was, “What does he mean, his name is Blurryface?” and the second was, “What if I just drove my father’s Buick off the highway right now?”

“Stressed Out” is the kind of song you just know, you just fucking know , is going to resonate with the kids lingering outside Hot Topic like it’s CBGBs, picking wax out of their gauges and smoking a single menthol together. Whatever appeal Twenty One Pilots is reaching out toward, with their Good Charlotte-laden skinny torsos trembling from the effort, is beyond my comprehension.

In the second verse, TylerJosephJoshDun aka Blurryface, laments not being able to make a candle out of the way his childhood smelled, because the only viable customer is his brother. That musing was recorded, I assume, as the young rapper navel-gazed so intently that his belly button sucked him into his own bony body like some demonic ouroborus. The “unnh” sound these boys end their verses with makes me not want to procreate. Twenty One Pilots is the reason our creator doesn’t speak to us anymore.

Eric Francisco: I know knocking on Flo Rida isn’t accomplishing anything. What, do I make fun of him for being inoffensive ? No, Flo Rida’s brand of house rap serves its purpose well — to sound good for three minutes — and I respect him for that. If nothing else, he makes good music for doing cardio.

But what the hell is “My House”? Is this from the same guy that made “Wild Ones,” the track that cemented Flo Rida as a dance-pop force to reckon with? “G.D.F.R.” aside, Rida’s work since that Sia collaboration have been numbingly interchangeable, as if copied and pasted from the same Garage Band presets. But “My House” takes the cake as a monotonous party track that even Flo Rida seemed bored from making. His vocals make him sound like he’s got better things to do than forge a top 40 song destined for a WWE pay-per-view.

I don’t like having nostalgia for pop culture that’s less than five years old, but even without the good memories I have when “Wild Ones” was platinum, the song’s kinetic energy compels you to want to dance. “My House,” which is literally about going to Flo Rida’s house and having some champagne on his sofa, feels like Flo wants to send everybody home already.

Adrian Marcano: Yes, Adele has won multiple Grammys, broken chart records, and is the best thing coming out of Britain since fish and chips. On “Hello”, the singer breaks down the complexities of her once amazing relationship and calls for the return of her former lover. But, for some strange reason, her ex-man will not pick up the phone and return her calls.

This song has to rank among some of the most boring, overplayed songs along with “Call Me Maybe,” which ironically is also about a useless phone conversation. You would think after calling for a while, Adele would cease her one-sided conversation and go outside and find somebody new — or perhaps make an eHarmony account. But no, we have to listen to her wallow in sadness for five damn minutes. If somebody called my phone this much, I would not pick up either.

More like this
Entertainment
8.10.2022 10:00 AM
The Acolyte leaks hint at the return of Obi-Wan Kenobi’s worst quality
By Dais Johnston
Gaming
8.9.2022 6:46 PM
League of Legends Star Guardian concept art is an emotional trip
By Robin Bea
Entertainment
12 hours ago
Will Andor de-canonize Star Wars Rebels? Here's what the showrunner says
By Dais Johnston
Share: