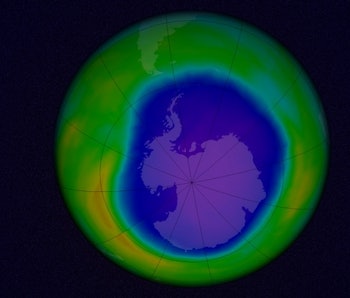 Some warm and fuzzy news this week on the environmental front: The ozone layer is exhibiting the “first fingerprints of healing,” MIT scientists report in a study published Thursday in the journal Science.

Since its discovery in the 1950s, the hole in the ozone layer has been a proxy lesson for the way in which human beings and their ravenous industrialization methods have ravaged the environment in unintended ways. Ozone in the Earth’s stratosphere acts as a shield that protects the planet from ultraviolet radiation emitted by the sun. Unfortunately, a number of chemicals stemming from man-made compounds — most notably chlorofluorocarbons (CFCs) produced by dry cleaning products, aerosols, and old refrigerators — degrade ozone and allow UV radiation to pass through and hit the surface, threatening the health of practically every living thing.

The new study indicates that ozone depletion peaked in 2000 — 13 years after the Montreal Protocol signed by most of the world’s nations banned CFCs — and is on the path towards reversing itself.

“We can now be confident that the things we’ve done have put the planet on a path to heal,” MIT atmospheric chemistry researcher and lead study author Susan Solomon said in a news release. “Which is pretty good for us, isn’t it? Aren’t we amazing humans, that we did something that created a situation that we decided collectively, as a world, ‘Let’s get rid of these molecules?’ We got rid of them, and now we’re seeing the planet respond.”

In their newest observations, Solomon and her team observed that as the rate of chlorine in the atmosphere decreased, the rate of the ozone hole’s formation slowed down, a sure sign of recovery. In fact, the hole itself has shrunk by more than 4 million square kilometers since 2000.

One strange anomaly worth mentioning is the fact that the ozone hole actually did peak in size in 2015. This spike, however, seems to be due to the eruption of the Chilean volcano Calbuco, which increases the amount of atmospheric particulate matter, consequently increasing the number of polar stratospheric clouds that human-made chlorine reacts with. For once, it wasn’t humans’ fault.

Solomon, who was the first to accurately characterize the role temperature and sunlight had on atmospheric chlorine chemistry back in 1986, believes that if current rates hold (and there aren’t a slew of surprise volcanic eruptions), the ozone layer might fully heal by midcentury.

“This brings so much of my own work over 30 years full circle,” she said. “Science was helpful in showing the path, diplomats and countries and industry were incredibly able in charting a pathway out of these molecules, and now we’ve actually seen the planet starting to get better. It’s a wonderful thing.”