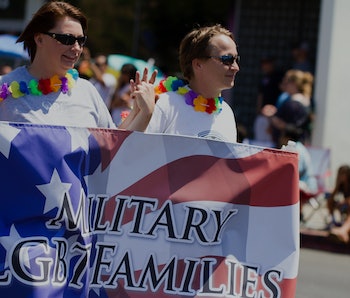 The United States’s military is not, as the near-universal axiom goes, “an instrument of social change.” Still, like a yet to be invented time-delay mirror, it eventually comes to reflect the society it serves. It wasn’t until 2010 that “Don’t Ask Don’t Tell” was repealed, allowing openly gay, lesbian, and bisexual individuals to serve in the military. Falling in line with the increased visibility of the transgender and gender-non-conforming communities of recent years, today, Defense Secretary Ashton B. Carter has repealed the Pentagon’s ban on openly transgender people serving in the military.

“Our mission is to defend this country, and we don’t want barriers unrelated to a persons qualification to serve preventing us from recruiting or retaining the soldier, sailor, airman or Marine who can best accomplish the mission,” Carter said, according to the Washington Post. Carter continued by saying that military officials can only be certain they recruit the most qualified individuals if they are given access to 100 percent of America’s population.

As is the case with most policy changes like this one, bureaucracy will impede the change from prompt enactment. The ban will be gradually lifted over the next 12 months, beginning with offered guidance to current transgender service members, guidebooks for commanders about leading transgender service members, and medical guidance for doctors to provide gender transition support. Transgender people who want to join the military will have to wait 18 months after receiving certification from a doctor – that they are stable in their new gender. Starting today, however, service members can’t be removed from or denied their positions on the basis of being transgender. They can also change their gender on official documents.

While today marks a major step forward for the transgender community, the United States follows in the footsteps of at least 18 other countries that have passed legislation allowing openly transgender people to serve in the military, including Australia, Canada, Israel, the United Kingdom, and several other European countries.

The policy change also highlights a curious inconsistency in the United State’s own legislation: Why did the ban on transgender people in the military remain after Don’t Ask Don’t Tell was repealed? The answer may have as much to do with forms as it does to do with prejudice. Either way, forms can follow function — and they can change.