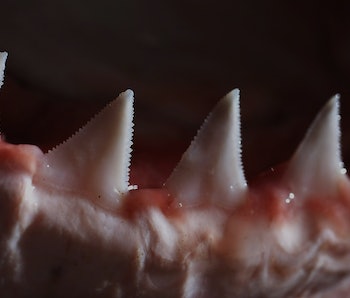 Humans love to fear sharks. That’s why we line up in surprising numbers to watch Blake Lively in a fictional standoff against a Great White, and how Discovery’s Shark Week has become the longest running television event in the history of totally arbitrary television events. We crave the adrenaline rush that seeing all those teeth provides even though many of us know we are much more likely to get struck by lightning than end up as chum. But it might be time to recalibrate that thinking because the odds of being attacked are changing. Climate change is pushing sharks into human-infested waters and attacks, which appear to be largely incidental or opportunistic, more or less adhere to a pretty basic formula: shark population times human population in a given piece of ocean.

Sharks are generally not all that interested in humans. But they don’t have great eyesight, so if they want to know if you’re a tasty seal, they may investigate with their teeth. That’s why the vast majority of shark attacks aren’t fatal; sharks generally lose interest after the first bite. So don’t think this is about food scarcity or ravenousness. It’s about what happens when humans cohabit the sea with massive death machines.

Warmer oceans push sharks further north — about 20 miles per decade, according to a recent study. As they head up the coast, they tend to move into more populated areas like, for example, the coasts of New York State and New Jersey. Last year broke the record for unprovoked shark attacks with 98 incidents world wide, and six deaths. 59 attacks were in the United States, and half of those took place in Florida.

The other side of the climate change coin is that the air gets hotter, too. What do people do when it’s hot out? They go to the beach. More people at the beach means higher chances that a shark might mistake one of them for food. Surfers are at a much higher risk than others because they tend to hang out further from shore, and can’t see what’s going on under the surface.

If you can’t muster the courage to dip your toes in for fear of some fierce fish biting them off consider this — the odds of a shark attack at that particular beach on that particular day are impossibly small. And if there is one, there will be a maximum of one, because people tend to clear beaches pretty quick when there’s a shark around. How many other people are on that beach with you? Odds are good that the shark gets one of them instead, and you get to keep all of your body parts.