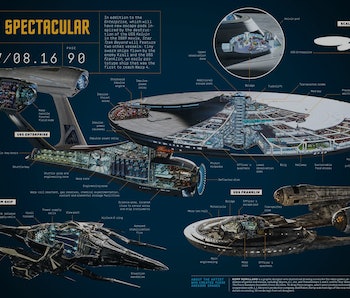 By now, it’s fairly common knowledge that the beloved Starship Enterprise is going to be destroyed at some point in the newest Star Trek movie, Star Trek Beyond. But what’s been intriguing fans is the presence of another Star Fleet ship in the trailers. Which ship is it? What’s it called? How does it figure into the plot of the new movie – and the overall continuity of Star Trek?

In two of the trailers, we’ve seen Captain Kirk and crew on what looks to be the bridge of a smaller starship. This spread confirms that ship is indeed the U.S.S Franklin, which we’re told here was an early prototype ship and one of the first Starfleet ships to ever reach Warp 4. This detail is relevant.

Because Trek fans love figuring out fictional timeline stuff more than maybe any fandom, the name of this ship actually popped up back in Janauary on TrekCore.com, but this new Warp 4 detail places the ship in a very specific part of Star Trek’s chronology. This ship slightly predates the events of the TV show Enterprise, nearly everyone’s least favorite version of Star Trek.

Set nearly a century before the original series, Enterprise starred Scott Bakula as Johnathan Archer, the Captain of the first Star Fleet ship to have the ability to go past Warp 5. Archer was even vaguely referenced in the 2009 Star Trek reboot when Scotty (Simon Pegg) mentions he accidentally beamed “Admiral Archer’s prized beagle” to an unknown location. Prior to this little tidbit, many fans had speculated this secret second ship (which we now know as the Franklin) was the same make as the NX-01 version of the Enterprise from the show Enterprise. But, if this ship could only get up to Warp 4, that means it’s from before that show.

In the movie itself however, the dialogue suggests that the U.S.S. Franklin was given to Captain Edison(Idris Elba) to command after the formation of the Federation, and after the war with the Xindi. If the Franklin only went Warp 4, that makes it less advanced than the NX-01 Enterprise which could go Warp 5. So why was it cruising around after the events of the show Enterprise? Many fans have pointed out this seems to be a mistake, that the Franklin should have been depicted as being a Warp 6 ship, and not a Warp 4 ship. However, there’s one easy explanation: it is an older ship than the NX-01 Enterprise, and it was in service before, just not under Captain Edison’s command. By the time the ship is given to Edison to command, it’s a “Federation” ship. This explains why their uniforms are all slightly different than on TV show Enterprise. See, problem solved!

To put it in perspective, this revelation is to Star Trek what the recent Forest Whitaker character revelation was to Star Wars. Meaning, it’s really only relevant for the totally devout.

What does it mean for the plot of the film? Not a lot. But if you’re anything like me or if you see the movie with a hardcore Star Trek fan, they might give some knowing nods and sighs connected with some kind of inside joke about this new little ship.

Star Trek Beyond is in theatres now.