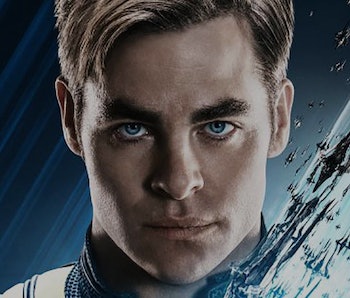 Continuing a mission to court both hardcore Trekkies and mainstream audiences, the third trailer for Star Trek Beyond has arrived with mixed-marketing: it also debuts new single “Sledgehammer” by Rihanna.

This trailer is a massive improvement on the first divisive “Sabotage” trailer. In fact, everything here (including the Rihanna song!) seems intent on making everyone care about a film which, so far, seems to have garnered only lukewarm anticipation.

If we give up worrying about the inherent need for Trek movies to be brainy for a moment, and instead focus on the wonderful characters everyone loves so much, this trailer is totally great.

Like the Star Trek Beyond trailer where Idris Ebla captures the crew (which featured no pop music) this one again focuses on the notion that Captain Kirk is trying to find his own identity outside of just being his father’s son. Part of that identity is being the Captain of the Starship Enterprise, something that is definitely being taken away from him in this trailer.

All hardcore Trek fans know that the Enterprise herself is as much a character as any member of the crew, making the shots of the ship’s destruction legitimately compelling and tough to watch. Sure, Star Trek loves blowing up the Enterprise in order to get you to care about what’s going on, which occasionally even means giving the crew a new ship. (Which seems to be happening this time around, too). But with this trailer, there’s plenty of attention paid to the entire cast, from Spock to Chekov (played by the late Anton Yelchin), something tender is happening here, which the other trailers have lacked. Plus, Rihanna’s “Sledgehammer” really works.

We’re all going to have some bittersweet feelings about this movie, and this latest trailer seems to reflect a feeling of seriousness and drama directed at beloved Star Trek characters. Despite everyone’s concerns, maybe the human adventure is just beginning.

Here’s the latest trailer for Star Trek Beyond:

More like this
Entertainment
6.14.2022 4:50 PM
A Joker 2 musical would actually be great — here’s why
By Dais Johnston
Mind and Body
3 hours ago
How music makes you feel may depend less on your brain than scientists once thought — study
By Allison Parshall
Entertainment
11 hours ago
25 years ago, Nic Cage made his most explosive sci-fi movie ever — it was almost even better
By Jake Kleinman
Share: