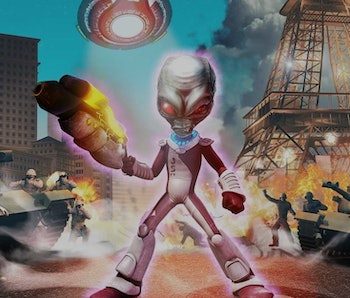 Matthew Harding had the dream job of any warm-blooded geek: making video games. Born and raised in Connecticut, Harding spent his young-adult years traveling before he was employed in the Australian branch of the now-closed Pandemic Studios in Brisbane. He was living abroad when 9/11 happened.

After finishing Army Men: RTS, a game that appropriated plastic green army toys as avatars, things got serious at the dawn of the Iraq War. Harding remembers when the studio’s American team, headquartered in Santa Monica, talked up creating games for the military: Hyper-realistic simulators where shooting dark-skinned enemies in Middle Eastern-ish locales was the default action. Video games became an outlet to capitalize on a new, aggressive cultural appetite.

“I remember being surprised,” Harding tells Inverse. “I feel like this is what the world needs less of, and we’re making more of it.”

Now, 15 years after September 11, the fear-mongering of immigrants from the Middle East (and Mexico, because why not?) is a talking point in another tumultuous election year. Observers of American politics saw the radicalism echo across the pond when the U.K. voted by a narrow margin to leave the European Union, an argument stemming from right-wing populism wishing to keep Britain great by keeping immigrants out.

Science-fiction, of which Harding is a lifelong fan, has a complicated understanding of immigrants. Thinly veiled as aliens from other planets, sci-fi’s metaphors for immigration sees a diversity of approaches: Star Trek and Babylon 5 prefer diplomacy. Mass Effect offers choices, kind of. Independence Day shoots first, no questions ever.

Gaming mostly tends to be like Independence Day. While nuanced explorations like Mass Effect exist and even Halo tries to make extraterrestrial beings sympathetic, video games have long made aliens shorthand for “other” invaders. Space Invaders, Galaga, Doom, Destiny — there wouldn’t be a game if there was a “diplomacy” button, but what kind of references are sci-fi games impressing upon its audience?

Harding remembers the last game he pitched before leaving to embark on a life-changing sabbatical. “It was the name that came first. Destroy All Humans.”

“The industry picks the wrong things to copy.”

In 2002, Pandemic was forced to cancel its next game Oddballs (Harding’s description: “Cute creatures pop up into balls and bang into each other”) for the Xbox. Spending his morning commute in frustration, Harding thought about giving exactly the violent fantasy publishers wanted to sell, just to shut them up: a game where you kill everyone. With sarcasm embedded in the title “Destroy All Humans”, the game naturally led to an inversion of alien-invasion tropes.

“We’ve seen lots of alien invasions where we stop aliens, but we’ve never [been] the aliens, and that would be fun. That’s a premise for getting to do mindless destruction that makes sense,” he remembers. “It honestly was a sarcastic joke. Because I felt, ‘Here’s what it sounds like you want.’ They said, ‘Yes, that is what we want.’”

Two of the biggest games at the time shaped Destroy All Humans! “The only thing selling great [on Xbox] was Halo, which you might be familiar with,” Harding jokes about Microsoft’s billion dollar sci-fi shooter franchise. “Microsoft wisely made the decision that people were buying Xbox to play Halo. They weren’t going to play cute creatures that pop into balls.”

The other game of the hour was Grand Theft Auto: Vice City, which informed the technical layout of Harding’s idea of human genocide. “The industry picks the wrong things that worked to copy,” he laments. “[Violence is] not what made those things great. Vice City is a great game, but not because it’s sadistic.”

Destroy All Humans! was released to rave reviews in 2005, its spoof of Cold War paranoia and low-budget sci-fi movies earned the game its highest marks. Set in 1959, players controlled a waist-high space alien named Crypto as part of the first wave of invaders terrorizing small towns in the heartlands of America.

Harding didn’t stay long into production. While he received creator credit, the former software designer admits didn’t have “energy or interest” to take a game from concept to market.

“Really, are you flying over a city in a UFO blowing up all the buildings? Where’s the game in that? We wanted it to be like Grand Theft Auto, on the ground as an alien, but why? If you’ve got a spaceship, why would you ever get out? There were questions like that I didn’t want to solve.”

He did have input in its non-threatening aesthetic.

“Pretty much everybody was on board [to] do a satirical game, because the premise is funny,” he explained. “Alien invasion movies from the ‘50s are funny. It would be harder and less interesting to approach that in a serious way. We wanted to make a funny game.”

Ultimately, the reversal of alien tropes was the winning concept. Gamers understood and responded to the idea, propelling Destroy All Humans! into a franchise (its current limbo due to IP holder THQ’s bankruptcy in 2012). “I think the moral impunity was big,” Harding muses about his invasion parody. “The litmus test for me is, do I want to indulge this fantasy? Invading Earth, doing anything you want to anybody, stuffing them in your spaceship, running tests, that is a fantasy intriguing to people.”

It just wasn’t his vision. Harding had something else in mind.

A Rebuttal to Tribalism

Uninterested in terror, even when it’s funny, Harding left Pandemic and traveled. From Italy to Russia to New York, he shot and edited footage of him dancing like a goofball and posted it on a radical new website – YouTube. “Where the Hell is Matt?” became one of the first viral hits on the internet, which he followed up in 2008 with strangers in every locale. The kind of cheesy, the-world-is-small feel good videos that make you think world peace isn’t so out of reach.

“I started my late 20s very self-focused,” Harding says. “Once I danced with other people, it struck me. This is a prism. It’s a way of showing people across cultures express joy in similar ways. Seeing people smiling, laughing, feeling awkward, breaks down barriers. It’s a rebuttal to tribalism. I feel tribalism is a problem.”

Throughout our conversation, after we’ve already talked at length about video games and aliens, it was tribalism where Harding’s deep dive into sci-fi really began. “I always think of 2001,” he said, citing Stanley Kubrick’s influential 1968 film. “There’s a scene where apes are at a watering hole, and another group of apes start fighting. Here’s two tribes fighting over the same resource. They clash, and the one with tools, bones as weapons, wins.”

“It’s easier to make a game about aliens that are just bad, and you don’t need to ask why.”

Not all stories are written in stone, nor are they filmed or coded in binary ones and zeros. To Harding, and no doubt many sci-fi enthusiasts, the genre is another canvas, just another form of exploration. “There’s movies like Battle: Los Angeles where aliens are just bad coming to kill us. We have to kill them no questions asked. Video games lend themselves well to that. Point your weapon and pull the trigger, that’s fun. They’re not good at making you ask why, something movies and books are better at. It’s easier to make a game about aliens that are just bad, and you don’t need to ask why.”

Not one to dismiss his old profession for poisoning political discourse — Harding is still an avid player, even of Call of Duty — Harding argues it’s the convenience of the narrative that offers a cheat code for debates.

“There’s this underling idea that those people with problems over there should stay in that place, and we don’t want their problems. When we integrate, we mix our existences, and if we can keep them out, then we’ll be better. Forget that. It’s a false premise.”

I ask Harding if his experience traveling — which few can realistically experience on a regular basis — re-shaped his first-person shooting as first-person perspective. He agrees. “This us and them mentality is dangerous and threatening, so the videos are my little attempt at, particularly for kids, creating images that counter ones they mostly see.”

“When you bring up aliens as an allegory, it’s pleasant,” he adds. “When aliens come to Earth, their problems [are] separate, there’s no connection, they’re other and we need to get rid of them. Build a wall. Stop them. With the alien invasion trope is the sense of keeping out-groups away, and preserving what we have and not sharing it.”

Resistance is not futile, however. As a former creative in the game industry, Harding bears a similar notion I’ve seen many other developers, writers, and filmmakers, all share: Art is expression.

“[Video games] is a safe way of exploring biases,” he argues. “We can exercise that. This is what fantasy is for. It sounds like I’m talking about fetishes, but it’s all the same. We have very big, complicated brains, and we create things that aren’t real so we can process them.”

“It’s fine we make Independence Day about aliens invading,” Harding says. “We blow them up, and walk out of the movie feeling great. [Because when] we walk out of the theater into a real world, it’s not aliens, they’re not evil. We can’t walk out of that movie and go, ‘That’s like this going on, we should deal with it the same way.’ That’s something people do and it’s not the movie’s fault. It’s okay to see a movie about fun things, but when we’re in the real world, we’ve got to think a little bit harder, and ask more questions.”

Before I reached out to Harding, who still produces videos, his former Pandemic employee admits he “had not really thought about” the metaphor but is aware of its parallels. I then ask if he ever played Destroy All Humans!, the game he came up with one frustrated morning in 2002.