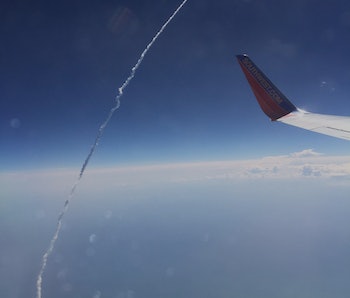 When Ryan Kennedy boarded his Friday morning Southwest Airlines flight from Providence, Rhode Island to Fort Lauderdale, Florida this morning, he settled in for the every-day routine of air travel. There wasn’t any wifi on board, and Kennedy wondered (hyperbolically) how he would survive. He managed to fall asleep, however, passing most of the flight with his eyes closed, until a pilot’s announcement woke him up.

The pilot was telling everyone to look out the left side windows, which Kennedy had been sleeping on. Pilots will occasionally point out sights or scenery on flights, but this one was a rare sight — the plane passed over Cape Canaveral, Florida just as United Launch Alliance launched a tricked out Atlas V rocket loaded with a Navy satellite into space.

When he woke up, the rocket was already in the air, but he quickly snapped an epic photo of the launch’s entire vapor trail, with the Atlas V roaring upwards at the tip. Kennedy said he’s seen rocket launches in person before — he was in Orlando during the scrubbed ULA launch — but never with a view like this.

Kennedy tells Inverse that his whole side of the plane was full of “oohs and aahs,” with plenty of people snapping photos, but his went viral.

Unfortunately, the view wasn’t so good for everyone on the plane.

ULA has a pretty great record of successful launches so far.

Kennedy said he “watched it until he couldn’t see it anymore.” We’re guessing he wasn’t worrying about wifi anymore.

Kudos to the pilot for making sure his passengers got a show.