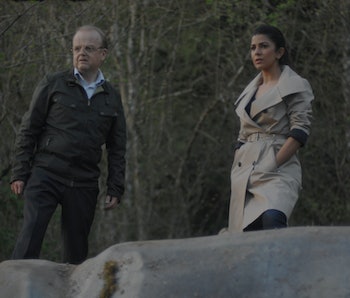 Yet another flashback-filled origin story makes up Wayward Pines, the apocalyptic Fox thriller shaping up to be a fascinating experiment in modern TV. While Pines is not at all a shared anthology and is continuing a linear narrative, Season 2’s arcs, themes, and motivations are so removed from Season 1 (and everything that made it work) but also, somehow, inseparable. “Sound the Alarm” is another instance of this: It’s so entrenched as a Season 2 episode with its origin of Rebecca Yedlin (Nimrat Kaur), but its plot could not have happened without last season.

The specter of David Pilcher has haunted Wayward Pines (the town and the show) all season long. His portrait is up in every office like he was president, and his name is uttered with reverence. But at the end of the day Pilcher was a man, a Noah building his ark. In “Sound the Alarm,” Toby Jones reprises Pilcher to add gravity and crucial continuity to the important story of Rebecca, the architect to Pilcher’s ark: Wayward Pines.

Rebecca was awake living in the town a full three years before her husband, Theo (Jason Patric) could be removed from cryo. In that time, she married Xander (Josh Helman), providing an out-of-the-blue soap opera arc to Wayward Pines. Rebecca and Theo’s rocky relationship could have been fine on its own without a third person, but to throw in a “twist” like Xander is Wayward Pines swinging too hard for the fences.

Not that it isn’t admirable. Frank (Michael Garza) functions as a glimpse into the younger generation, and it’s expectedly a different world. Born into Wayward Pines without ever knowing the world before it, this generation of the town don’t know how to comprehend things like love or sex. Procreation rooms is the beginning of life for them, and the Orwellian invasiveness of something as intimate like baby-making can cripple someone like Frank. His closeted interest in other boys may ostracize him when everyone’s purpose is to populate.

Besides that, most of “Sound the Alarm” is one giant information dump told through flashbacks, showing that Wayward Pines’s idea to softly restart in Season 2 may not have been a good one. There’s a lot of familiar beats being hit all over again with moderately less interesting characters. Theresa (Shannyn Sossaman) is still around, but all she can talk about is Ben. While Wayward Pines struggles to move forward, one of its few remaining Season 1 characters is dwelling too much on the past.

There’s only one new development: The Abbie that snuck in to the town at the end of last week turned out to be a female — the first anyone from the town had ever seen. Codenamed “Margaret,” she’ll be studied ceaselessly, which is bad. It seems female Abbies, or at the very least “Margaret” has a psychic connection to the abbie horde. I don’t know much about bees, but abbies seem to be like bees with a “Queen”, and right now their queen is in danger. Expect casualties.