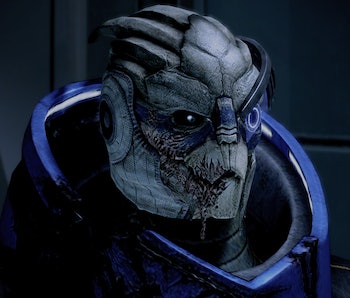 Aliens have been a fictional fascination in popular culture for decades. We’ve seen the mindless takeovers, the blown-up national buildings, the generic green or gray bulbous-headed aliens, and the faceless army inside of the UFOs from every medium possible. Video games have given us intricate, unique, and extensively thought-out world building as far as alien invaders and playable characters

These are some of the best games that feature aliens that want more than to just take them to our leader.

This series isn’t just for first-person mayhem online, but a struggle between humankind and the Covenant, a theocratic and militaristic union of a wide and diverse range of species throughout the galaxy that worship the extinct race known as the Forerunners.

Unluckily for Earthlings, the Covenant decides that humans are an affront to their gods and this alliance becomes the main antagonist during the trilogy, bringing forth an interesting and engaging sci-fi and philosophical experience.

This parody of the old-fashioned alien invasion films of the ‘50s is a comical and fun game that allows the player to control a large-headed gray alien as he collects human DNA and blows things up from his UFO.

The game is overflowing with pop culture references and it uses those hackneyed alien tropes to its advantage.

We can’t have Samus without bounty hunting, and we can’t have intergalactic bounty hunting without a few aliens for our favorite orange-wearing badass to track down. This world is rife with creatures and fun characters, as well as terrifying jellyfish leeches that drain the life out of its victims. Get your blasters ready for those creepy crawlies.

Opening up a dimensional rift swarms this universe with a variety of different species from the world of Xen, including the intimidating force of the Combine, which decimate Earth’s forces in seven hours and then proceed to harshly rule over the Earth. This series definitely gives the player another avenue in which to explore the genre of alien invasions.

This series is most well-known for the slave race known as the Mudokons that become enslaved by the Glukkons due to their passive attitudes. But don’t let Abe’s lighthearted and sometimes lazy attitude deter you from playing this game. Even though Abe and his fellow Mudokons are wont to fight, they can possess other creatures and turn themselves into fearsome creatures if need be.

An expansive world with intricate lore for every species dotting this universe, Mass Effect not only became as popular as it did because of its gameplay, but for the colorful cast of characters – and that can be taken literally, too. We get to see and read about the religion, military, and biology of species like Turians, Elcor, Quarians, and Asari.

This race of devilish cuties take over Earth in the most entertaining way possible – for the gamer, anyway. They stick everything into a ball which they roll along cities and mountains and people, collecting bigger and bigger objects as the ball grows, all the while skipping behind it to the fun music playing in the background. So its probably not a very pleasant experience for those stuck in the sticky ball, but for all of us playing, we’re just as content to nod our head along to the music as well.

This one follows the protagonist Tommy as he explores the extraterrestrial spaceship known as the Sphere. He uses portals and varying gravity to explore and later defeat the spacecraft, leaving with his girlfriend and grandfather in tow. A reimagining of the original 2006 game should be coming out in 2017

This first-person shooter pits an ancient alien race against the U.S. Army operative Nomad where he finds out what exactly the mysterious structure is inside of the mountain somewhere within a fictional city of the Philippines.

Even though this is now in the realm of films, the lovable lombax and his freedom fighting friends speckle the universe as a diverse crowd of fighters and mechanics and hoverboarders.

More like this
Gaming
Feb. 1, 2023
The Best Video Game Ever Made Just Got Its Own Holiday
By Hayes Madsen
Gaming
Jan. 30, 2023
Now’s the perfect time to play The Last of Us Part II
By Willa Rowe
Gaming
Jan. 25, 2023
5 years ago, the most heartfelt indie platformer changed video games forever
By Willa Rowe
LEARN SOMETHING NEW EVERY DAY.
Related Tags
Share: