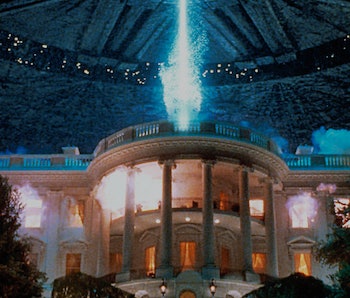 Filmmaker Roland Emmerich is a master of disaster.

Though he started off with smaller films in his native Germany, he made the jump to big-budget Hollywood fare, starting with 1992’s Universal Soldier and then 1994’s Kurt Russell franchise starter Stargate. Both films featured a decent share of things that went boom – and in 1996, Emmerich got really serious about blowing shit up. Independence Day was a big cheesy sci-fi special effects extravaganza throwback, filled to the brim with movie stars and detonated landmarks. With that, Emmerich became the go-to demolition man of recognizable locales on the big-screen, and he continued his streak through monster movies, environmental cautionary tales, semi-religious epics, and mindless action-movie fun.

“I’m not blowing up stuff just to blow up; there’s always a story point to it,” the filmmaker recently told Variety. Sure, but maybe the point is to make the story fun? Emmerich seems to take a particular delight in subjecting some of the most recognizable locations around the world to annihilation. And somehow, it’s rarely ever offensive.

In Independence Day: Resurgence, set for release on Friday, Emmerich ups the ante by flattening, among other iconic locations, the Burj Khalifa and the London Eye. It gets so absurd that characters even comment on it. “They like to get the landmarks,” Jeff Goldblum’s reluctant hero David Levinson says in one trailer. And so with that in mind, let’s take a look at just how many landmarks Emmerich has demolished on film.

This is where it all began. Independence Day harkened back to 1970s destruction thrillers like The Towering Inferno, while writing the special effects-heavy popcorn blockbuster language for summer movies that came after it. You basically have Emmerich’s movie to thank for what Michael Bay has wrought on cinema after 1996. Everything about Emmerich’s calculated landmark destruction can be found in Independence Day, which basically used its alien invasion premise to blow a ton of important stuff up.

This maligned American version of Godzilla was less about faithfully adapting the celebrated history of the iconic Japanese monster movie series than Emmerich choosing which parts of New York would look cool as a pile of rubble. It was, more or less, Emmerich grafting his Independence Day formula on to another, more local blockbuster. Instead of aliens, the baddie is a huge monster with a curiously defined jawline. The final scene, with Matthew Broderick trying to outrun little mini Godzilla babies in a nearly ruined Madison Square Garden is pure cheese. Unfortunately for the Knicks and Rangers it isn’t the worst thing to happen at MSG in recent years.

The Day After Tomorrow

Emmerich’s lavish spin on An Inconvenient Truth starring Jake Gyllenhaal was about as deep as its title. On the flip side, you could probably show some climate change deniers this movie and switch their minds because of all the gnarly tsunami special effects. Sure, severe tornados in downtown Los Angeles aren’t particularly plausible, they made for one of the most iconic images of Emmerich’s career. The Day After Tomorrow also marks the first time Emmerich doubled up on the destruction, as it was the second time he said bye-bye to the Capitol Records Building and the U.S. Bank Tower.

After tackling science, Emmerich used phony Mayan religious prophecies about the end of the world to put another jamoke protagonist, played by John Cusack, through the destructive ringer. If The Day After Tomorrow was Emmerich saying people couldn’t save themselves, 2012 was him telling people that their god can’t even save them. The director hit all his favorite locales again, but this time went international, bringing down the Christ statue in Rio and St. Peter’s Basilica at the Vatican. There was a mini-controversy about Emmerich leaving out scenes of the destruction of the Kaaba, the cube-shaped structure inside the Grand Mosque in Mecca, for fear of having a fatwa called on him.

While not an actual place, Shakespeare is nothing short of a literary landmark, and after co-opting religious gobbledygook in 2012, Emmerich figured why not spin the conspiracy theory the same way by throwing a wrench in the Bard’s good name. The director’s 2011 Elizabethan drama called into question whether Shakespeare actually wrote all his classics, including Hamlet, Romeo and Juliet, and more. Shakespeare truthers ate it up, but author Ron Rosenbaum called it “a laughably incoherent botch of a film,” and said “to remain silent in the face of stupidity this blatant is to acquiesce to a kind of culture-destroying ugliness.”

Third time’s a charm for Emmerich and the White House. But seriously, call a movie White House Down and you can’t possibly leave the humble abode of the leader of the free word all neat and tidy. Though the movie showcased that Channing Tatum could channel Die Hard-era Bruce Willis as a totally badass tank-top-wearing action star, White House Down proved to be among the more generic Emmerich films to feature iconic destruction.

Perhaps Emmerich’s biggest disaster movie to date, Stonewall riled up people who thought the filmmaker glossed over serious issues by making an offensive trivialization and rewrite of history — even more so than with Anonymous. Ostensibly a story about the 1969 Stonewall Riots with New York City police that sparked the modern gay-right movement, it was such a disaster that Vanity Fair critic Richard Lawson dubbed it “Independence Gay,” and not in a flattering way. Thankfully, Emmerich threw out his serious social issues for some good old fashioned alien invasion sequel fun.

More like this
Entertainment
2 hours ago
Talk to Me unleashes a gruesome ghost story on the TikTok generation
By Andy Crump
Entertainment
7 hours ago
Attack the Block sequel will take a page from the two greatest sci-fi sequels, director says
By Eric Francisco
Entertainment
Jan. 25, 2023
Infinity Pool is a hedonistic head-trip
By Isaac Feldberg
LEARN SOMETHING NEW EVERY DAY.
Related Tags
Share: