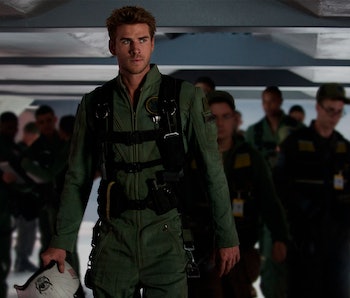 While the movie curiously won’t screen for American critics until the day it’s released, it seems our pals in the UK had a chance to sample the interplanetary destruction wrought by director Roland Emmerich’s aliens in his new super-sized sequel Independence Day: Resurgence.

The initial trailers made it seem like the truly dour Michael Bay-ification of summer blockbusters had taken over the once cheese-tastic fun heralded by the release of the original Independence Day in 1996. The alien invasion from the original was happening all over again (except this time there’s a gigantic alien hive led by a Godzilla-sized queen, which is no surprise considering Emmerich directed the infamously bad 1998 American remake), and it wasn’t just Will Smith missing from the sequel this time around. The early footage seemed to be way too serious a follow up to a winking disaster movie that was essentially a beefed-up love letter to similar schlocky 1970s fare. How can you expect actors to seriously utter the phrase “Earth Space Defense Force” without cracking a smile?

All skepticism aside, the early reviews thankfully paint Resurgence as a worthy and nostalgic throwback. Again, theres no Smith, but the movie seems stuffed to the gills with a huge cast of newbies and oldies like Jeff Goldblum. So what did the early reviewers have to say?

Empire’s review was effusive, saying, “As spectacular as you’d hope. Youll enjoy yourself enough that you won’t even miss Will Smith.” They went on to explain:

Allowing the same blend of multiplex-rattling spectacle and ‘yeah, you got us daftness, Emmerich has gone all out to recapture his ’96 mojo and, for the most part, succeeds. While the occasional call-back clunks (Jessie Usher as orphaned-son-of-Will-Smith Dylan Hiller fails to sell the line, “Get ready for a close encounter, bitch!”, but we’re not sure who ever could), other riffs prove sonorously nostalgic. And we’re not just talking about another death-defying dog. Whether it’s Goldblum reliving his co-pilot jitters in another spacecraft, Bill Pullman pulling on his flight suit once more as PTSD-stricken ex-president Whitmore, or Brent Spiner making a welcomely deranged return as surprisingly not-dead professor Brakish Okun, you’ll likely thrum with the same sweet, not-able-to-take-it-too-seriously joy you felt during the first film.

IGN was similarly impressed with the sequel’s handling of the cheese with the spectacle:

Independence Day: Resurgence is packed so full of cheese, explosions and too-convenient plot-twists it could sink a ship; yet it all adds up to a fun, old-fashioned disaster pic, made with such confidence and heart that it’s time we finally blast the guilt into the stratosphere where it belongs.

A silly, cheesy, spectacle-driven blockbuster with heart, Independence Day: Resurgence is a refreshing antidote to the grim and the serious sentiment we’ve seen trending in sci-fi flicks of recent years. While its plot is messy and it’s stuffed with too many characters, I dare you not to leave the theatre with a guilt-free smile on your face.

CNET’s review was a bit tepid, and explained that the new cast was lacking:

It’s technically and visually marvelous, but it’s hard not to get a little fatigued before the big finish…But the real problem isn’t the borderline tiresome carnage. It’s the cast..Returning characters like Jeff Goldblum, Brent Spiner and Judd Hirsch manage to make hay with their screen time and inject enough enthusiasm to keep “Resurgence” from flatlining, but their efforts can’t save the new cast.

GQ appreciated the way the sequel repurposed the original’s plot:

Emmerich gives it the old college try. The alien ship that threatens Earth this time is 3,000 miles wide, big enough to generate its own gravity and lift whole cities into its orbit, and it threatens to consume the very fabric of the planet. That means theres more talk of our “molten core” than one would expect outside of a particularly purple romance novel. He resists the temptation to recreate every beat of the original too, finding a few new twists on his alien menace that switch up the peril.

And Den of Geek loved how much the movie borrowed from some appropriately geeky sources:

This is a big, dumb sequel to a big, dumb movie - and Resurgence is cheerfully, gleefully aware of this…The plot appears to borrow ideas from a range of genre sources, including Greg Bear’s 80s invasion novel Forge Of God and the anime saga Super Dimensional Fortress Macross, better known to many in the west as a chunk of Carl Maceck’s Robotech series. Along with the latter’s idea of humans augmenting fighter jets and other weapons with alien technology, Resurgence also co-opts a distinctly anime-style sense of the strange and over-the-top. There are pew-pew laser battles, big aliens, bigger aliens and really huge aliens. There’s a delightfully odd shot of a school bus racing across gleaming salt flats, hotly pursued by an angry invader.

The Telegraph, however, was not so nice about the movie:

“This isn’t just lazy, it’s borderline nonsensical. Resurgence inflates the scale of the alien threat to such a preposterous degree – the mothership takes up roughly an eighth of the Earth’s total surface – that the queues of honking traffic and rooftop helicopter rescues we’re supposed to invest in can’t help but feel like microscopic trifles.”