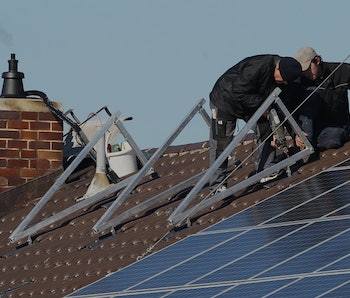 A new study has confirmed the obvious: If you’re going to tell people to make sacrifices for the benefit of the planet, you’d better make sure you’re leading by example. The research, published in the journal Climatic Change, shows that people who ask others to take steps to reduce their carbon footprints lose credibility if they use a lot of energy in their home, or if they frequently travel by plane. Purchasing carbon offsets mitigates, but does not eliminate, the loss of trust.

The results are not nearly as surprising as the fact that the study needed to be conducted in the first place. Shouldn’t folks who preach the perils of global warming be consistently attentive to minimizing the effects of their own actions on the planet? History shows this to not be true, and it’s a weakness easily exploited by political opponents. Al Gore, for example, came under fire after the release of An Inconvenient Truth for an electricity bill more than 12 times the average for a home in Nashville at the time. You won’t be surprised to learn that Gore very quickly invested in retrofits to make his house more eco-friendly, including the installation of 33 solar panels.

It follows that anyone who brings forth the message that climate change is a big problem that needs to be taken seriously should start with a careful examination of their own behavior. This new research, which surveyed nearly 5,000 online, found that people are more forgiving when a climate scientist engages in frequent plane travel as part of their job, but less forgiving if that person’s home energy use is greater than average. In the scenario provided to survey respondents, they imagine attending a talk by a well respected climate scientist with an impressive history of publication. Perhaps crucially, the speaker is not only describing the science of climate change, but urging action to reduce individual carbon footprints. No one likes a hypocrite.

The thing about climate change, though, is that it is fundamentally a problem of inequality. The higher up you are on the global hierarchy of political and socio-economic power, the more you have benefited from past burning of cheap fossil fuel, and the less likely you are to suffer the negative consequences of climate change. On the world stage, poorer countries want to see richer countries pay up for both climate change mitigation and the transition to a low-carbon future. And who could blame them?

This same dynamic plays out at an individual level. Climate change experts tend to be a privileged group. If they’re at the level where people will fly them across the country and pay to hear them speak, they very likely also have a very well paid tenured professorship. And people with more money — particularly busy, important people — tend to have larger carbon footprints.

The good news is, there’s really no excuse anymore for wealthy people concerned about climate change not to practice what they preach. There are multitudes of consumer-level technologies to reduce carbon impacts in the home, and they’re getting more affordable every year. Electric cars are competitively priced. Reputable carbon offset programs are easy to find.

Famous climate change advocates don’t need to give up their mansions, they only have to buy solar panels. Rich countries don’t have to give up their standard of living, they only have to develop good policies to allow for a quick transition away from fossil fuels. Climate change and social justice are indivisible — progress will not occur until those with the resources to take the lead take the lead.

More like this
Science
14 hours ago
Millions of People Are at Risk of This Rare Climate Change Threat — Study
By Tara Yarlagadda
Science
Feb. 1, 2023
7 Years Ago the World Agreed to Slow Down Climate Change — But a New Report Shows an Uneven Future
By Tara Yarlagadda
Science
Jan. 25, 2023
Look: Primate relative shows how ancient animals adapted to global warming
By Jennifer Walter
LEARN SOMETHING NEW EVERY DAY.
Related Tags
Share: