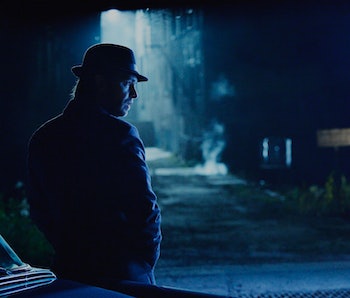 After the carnage in “Hyena” last week, the team on 12 Monkeys is armed with all kinds of information, but — as always — the group is split as to how to get the job done. As the temporal storms increase in violence in 2044, Jones (Barbara Sukowa) and Cole (Aaron Stanford) are dead set on stopping the last — and largest — paradox, while Cassie (Amanda Schull) and Ramse (Kirk Acevedo) are still intent on getting back to 1961 to hunt down some ex-Nazi. Of course, focus is the key to victory, so only one side can have their say in the matter.

The winner turns out to be Cole, and the lady with the keys to the time machine. Their goal is to stop the last paradox and therefore change the world for the better. Cassie and Ramse, meanwhile, are only slightly pouty about not being able to murder the Witness’s face off. So, it’s back to 1957 for Cole, Ramse, and Cassie so the trio can hunt for the source of the last paradox in upstate New York.

Oh wait, thanks to subversive selfishness on the part of two-thirds of the away team, none of that actually happens.

One Quick Note About Todd Stashwick

Before we jump in, let’s take a second to shine a light on the present day mercenary, Deacon, played with real weight by Todd Stashwick.

Stashwick is so adept (and so much to watch) playing the stoic tough guy that you come to believe the character is maybe an inch below surface deep. Yet, from time to time, Stashwick is given the option to really dig deep into his character’s torment and show us whats inside. He’s rarely given lines during these scenes, which might be a hindrance to lesser talents, but for Stashwick, it seems like a strength.

Tonight’s example came early on, when it’s revealed that Deacon and Cassie spent one night together some time ago. Deacon still clearly has feelings, but Cassie has moved on. Stashwick says that their one night together meant nothing more to Cassie than momentary companionship with a vulnerability that’s so raw it’s impossible not to feel for the guy. The same level of emotional depth was on display a few episodes ago when Ramse spent a few moments taunting Deacon with knowledge of his abusive childhood.

Deacon doesn’t get a bunch of opportunities to prove that he’s not a sociopath, but when he does, Todd Stashwick takes full advantage of the opportunity. Hes the only man on TV who can cry while still looking like a total badass.

Heading to the Fatherland

To their credit, the writers did an excellent job setting up Cassie and Ramse’s deception to the point that most audience members likely didn’t realize Cassie and Ramse pulled a fast one until Cole, basking in the smug glow of his victory, starts to get a little woozy from the mickey he’s been slipped. Sure, it’s tough to see the team so splintered (couldn’t be helped), but how can you resist a trip to post-war Germany to see the team track a man who’s wanted by the Mossad for war crimes?

As Cole re-teams with FBI Agent Gale (Jay Karnes), it’s off to Germany to wrangle Cassie and Ramse who are, in turn, hunting down an ex-Nazi scientist named Kirshner. The inclusion of Syfy Channel staple Matt Frewer as Dr. Kirshner was a particular delight on screen, whether he’s trapping exotic animals (a la Eureka) or playing the cunning nerd, as he is in this week’s episode. His scruffy, thoughtful voice is the perfect accent to a story that reached back to the beginning of the 20th century and lays the groundwork for a race of superhumans who are impervious to the effects of time itself.

In no time, though, Cassie and Ramse find themselves tied to chairs yet again, this time being questioned by Mossad agents intent on getting a little retribution for the crimes visited against their people. It’s becoming increasingly fun to watch Acevedo and Schull work together; their love-hate dynamic plays out extremely well on the screen. The scene, here, does an excellent job illustrating how far their relationship has come is just a short time by juxtaposing their decidedly different responses to seeing the other tortured.

Moments like this are what makes 12 Monkeys such a unique show. After a short jaunt from one side of Berlin to the other, the team arrives at Kirshner’s lab. Not, of course, before saying goodbye to FBI Agent Gale, a death that Cole will absolutely carry with him moving forward.

The revelations as the trio enters Kirshner’s lab come fast and heavy, and yet the show plays each with no more importance than the dialogue of the previous scenes. The importance of each — Cole and Cassie seeing the Word of the Witness, the knowledge that Olivia is an engineered human, and that she and the Tall Man are all part of one big, dysfunctional family — are there for the audience to discern. It’s a reward for fans of the show without distracting from the immediate adventure at hand.

Perhaps that’s part of showrunner Terry Matalas intentions with the scene. There are so many important discoveries, here, yet Cole and his team are so caught up in their immediate drama that they can’t take five freaking seconds out of their infighting to realize they’ve stumbled upon the origins of the Witness’ machinations.

Get It Together, Guys

Time is essentially up now. While the encounter at Kirshner’s lab was plenty enlightening, it didn’t get Cassie and Ramse any closer to “cutting the head off the snake.” The duo are now in lockup in the facility in 2044, the time machine is basically out of juice, Jones is dealing with a nerd rebellion among her scientists and, well, humanity is pretty much up shit’s creek.

A show about time will always find a way to reset the timer (hopefully all the way into a third season), but if Jones and the good guys want to have any hope of getting something productive done, they’re going to have to get on the same page. Of course, try telling James Cole he can’t do something all by himself, so audiences can probably look forward to the time traveler taking a solo trip back to 1957 in an attempt to set right what once went wrong.

Also, let’s not forget that this is still knocking on the facility’s front door.