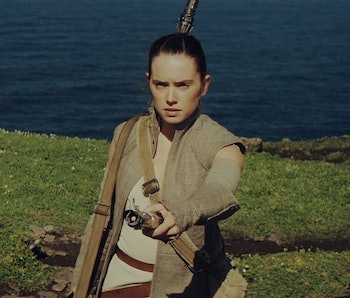 For Star Wars fans, this is a dangerous and wonderful time. Wonderful, because we’ll never have this exact level of fun speculation again, at least not until we’re in between Episodes VIII and IX. But dangerous, because we’re so hungry for knowledge about Episode VIII that we’ll entertain almost any possibility. If I told you right now that I’ve personally talked to Natalie Portman and she definitely appears in the next film as a reanimated cyborg version of Padme Amidala, you wouldn’t believe me, but you’d still want to talk about it. Nothing about zombie Natalie Portman makes sense, but I’m sure if I tried, I could come up with some sort of faux-Star Wars precedent to justify it. After all, Vader was a cyborg, right? And General Grievous, too? Plus, everybody loves Natalie Portman, so boom! There you go! It’s possible, right?

No. And there’s no need for me to put the words “possible spoiler” in front of my hypothetical Zombie-Portman idea, and I don’t think I need to tell you the below is a possible spoiler, because it really seems like it’s not. Still: possible fake spoiler alert!

Here’s the Episode VIII rumor: the idea that Rey and Luke hang out together and have a vision of a future that involves a magic tree and also reveals Rey’s parents as not Luke. As reported by ComicBookMovie, Luke takes Rey’s hand and leads her into a vision of the distant past, which feels a lot like Dumbledore taking Harry Potter’s hand and guiding him through memories, or Scrooge being encouraged to grab the hem of the Ghost-of-Christmas-Present’s robe in order to fly.

In this vision, Luke reveals the truth about Rey’s parents and he’s not one of them. Also, Luke shows Rey the origins of the Force and how it was all about a distant past where a boy and girl were fighting, the boy killed the girl, and then touched a magic tree. This, seems to be the way the “dark side” and the “light side” were born.

On its face, the bare bones of the content of this rumor don’t seem that unreasonable; Star Wars does have a weird track-record in trying to explain the Force. In the classic films you just sort of had to accept it. In the prequels it was kind of mysticism mashed-up with made-up biology. And in the Clone Wars cartoon, there was a timeless metaphysical realm in which a “daughter” and a “son” fought seemingly perpetually and sometimes turned into animals. Could Episode VIII offer an allegorical, almost folk-tale version of the origin of Star Wars’s essential religion? Maybe.

But, this scene reads fake, mostly because in the “leaked” pages Luke says, “Take my hand. This might feel a little weird.” What’s weird here is the word “weird.” It sounds more like fan fiction than anything in real Star Wars. Would Luke, a Jedi Master say “weird?” Would Sherlock Holmes say “I’m really pooped out?” after a long day of detective work? You get it. From a voice perspective, this seems wrong. I could get more annoying and point out that the format of the pages also looks suspiciously not like a real shooting script, but I think you get it. The idea of a flashback to the distant past in the next regular Star Wars movie isn’t out of the question, but everything about the tone and actual writing of these pages seems wrong. Meaning, if any of this turns out to be true, it’s just an actual coincidence. No grains of salt are needed with this “rumor.” It looks more like complete speculation. (Which is fine, by the way.)

If we do discover things like the origin of the Force or who Rey’s parents are in Episode VIII, it might be in a some kind of flashback Force vision. But one thing is for certain: the script from which this scene exists will be formatted correctly and contain dialogue in which characters like Luke and Rey actually sound very specifically like themselves.