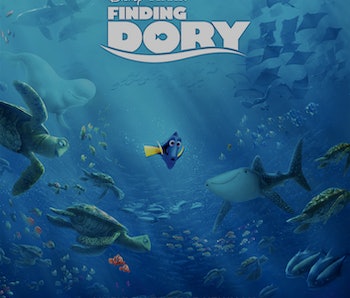 During a glorious 15-year run starting in the mid-‘90s, Pixar was untouchable, a class above every other animation company. It produced classic after classic, beginning with Toy Story and continuing through Monsters, Inc., The Incredibles, Up and WALL-E, ushering in a golden age of animation. At one point, it seemed like a given that its core geniuses, led by John Lasseter, would cook up something innovative and unparalleled each year.

Then came Cars 2, the first critical bomb, diluting the magical Pixar brand. Instead of beloved original stories that consistently changed animation with a fanciful je ne sais quoi, it was seen by many as a way to easily cash-in on name recognition. But it did incredibly well at the box office, and so Pixar announced even more sequels — including a third Cars film. And the next few years will be stocked with Pixar sequels, placed in between original films. With another Pixar sequel, Finding Dory, hitting theaters this Friday, it’s easy to get tired of the continuations. But it’s obvious the magic hasn’t gone anywhere. Pixar, through ups and downs, was never anything but unstoppable.

For nearly a decade, director Andrew Stanton’s Finding Nemo was Pixar’s most successful movie. The next Pixar creation that supplanted it wasn’t Up, the gloriously off-beat geriatric adventure story from director Peter Docter. It wasn’t even Ratatouille, the animated culinary delight by visionary filmmaker Brad Bird. It was a sequel.

Toy Story 3 broke the billion-dollar mark at the box office in 2010, making it one of the highest grossing movies (let alone among sequels) of all time. Its continuation of toy-cowboy Woody (voiced by Tom Hanks) and his loyal astronaut buddy Buzz (Tim Allen) was a huge success, and, surprisingly, it was also a really great movie. There was even a mini-controversy surrounding its release about who would be the first reviewer to give it a bad review, negating its 100 percent score on controversial, but still handy review-site Rotten Tomatoes. At 99 percent, it still technically remains the second-best reviewed movie of all time.

Toy Story 3 proved that, regardless of what number came after a Pixar title, that they do sequels right. But before that, people tend to forget that the third Pixar movie ever released was Toy Story 2. Pixar was never afraid of sequels, they were just selective. 2 stands at 100 percent on Rotten Tomatoes, but aggregate review scores aside, Woody and Buzz’s second and third rodeos are where the trouble began.

Part of this negative view of Pixar sequels seems to stem from the fallout from the brief time that Pixar broke ties with Disney in 2004. Pixar wanted to reap the full benefits from the movies that they created, but Disney wouldn’t let them. At the time the pair shared box office and licensing revenues, but Disney retained the exclusive rights to make sequels to Pixar’s titles. At best they’d churn out forgettable direct-to-video trash, at worst they’d have A Bugs Life 5 ready to roll even before A Bugs Life 4 could even be released.

They separated without an agreement, and Disney moved ahead with Circle 7, their own in-house team that would focus solely on creating sequels to Pixar films. The first follow-up on the docket was their non-Pixar version of Toy Story 3.

The potential to tinker with the only property that the Pixar geniuses deemed sequel-worthy at the time was enough to prompt the pair to kiss and make-up. Disney eventually bought Pixar back in 2006 for $7.4 billion, Circle 7 was shuttered, and the team began their own Buzz and Woody three-quel.

According to Disney chief Bob Iger, who would go on to successfully broker lucrative deals between Disney and both Marvel and Lucasfilm, “It was really important to me that the people who made the films originally, who had the vision, who knew the characters and the essence of these films get a shot at making any films that weren’t derivative.”

Toy Story 3 proved Iger right, but unfortunately Cars 2, which followed in 2011, proved him wrong. One of their least-loved movies, Cars 2 drove the brand down by simply seeming like an excuse to sell backpacks and toys at Disney theme parks. Inside Pixar, the backlash was heard loud and clear.

On the verge of releasing another sequel, Monsters University, in 2013, Pixar and Walt Disney Animation Studios President Ed Catmull told BuzzFeed their plan of attack changed slightly, “For artistic reasons … its really important that we do an original film a year. He continued: “Every once in awhile, we get a film where we want or people want to see something continuing in that world — which is the rationale behind the sequel. They want those characters, which means we were successful with them. But if you keep doing that, then you aren’t doing original films.”

Catmull admitted they’d plan out an original film every year, then every other year they’d release a sequel. While it hasn’t panned out with the hugely successful original movie Inside Out and the not-so-successful The Good Dinosaur in 2015, the plan will begin with Stanton’s Finding Dory starting Friday.

In a recent post on io9, Stanton, who returned to Pixar after the infamous live action box office bomb John Carter, echoed Catmull’s assurance of original and natural sequels. “I couldn’t stop thinking about how I didn’t believe she’d be able to get back if she got lost again,” he told them, referring to the titular forgetful fish, Dory. She didn’t have the ability to find her way home again now that she found this wonderful family. I knew she was a tragic figure when I created her and I couldn’t drop it.”

Early reviews hint that Finding Dory might be another classic, and a worthy continuation of Pixar’s sequel streak. It’s a long road from the days when Pixar seemed allergic to even thinking about sequels that didn’t involve toys coming to life. With Cars 3, Toy Story 4, and The Incredibles 2* all planned through 2019 it’ll be up to those original stories and their sequels to keep the streak alive.