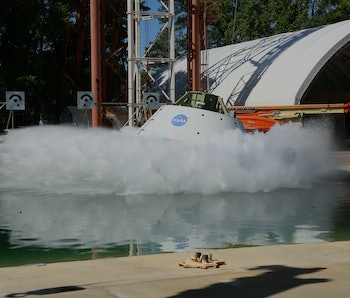 The process of designing a new spacecraft is a long, exhaustive, technical one. Designs spend hours on drawing boards, in 3D modeling programs, as scale prototypes, and in half-assembled configurations on the floor of gigantic hangars. Eventually, NASA puts them all together and flies them places, which in the case of the new Orion crew module, was a spectacular event in and of itself. But after a while, there’s nothing left to do but drop the whole multi-million dollar testament to human progress and innovation into a giant swimming pool and see what happens. Best of all, it’s all on video.

At some point in a spacecraft’s life, it’s probably going to come in contact with water. A lot of water. Specifically, the ocean, which covers 70 percent of the Earth’s surface and is often the most convenient landing place to stick a giant capsule that’s been super-heated by re-entering the Earth’s atmosphere.

NASA needs to know if the splashdown in an Orion vessel would, y’know, kill everyone inside, so they’re testing the whole process by stuffing the prototype spacecraft with crash-test dummies and repeatedly dropping it in a giant pool-pond-lake thing from an enormous crane capable of supporting the craft’s huge weight.

The dummies are wearing the same advanced spacesuits NASA’s astronauts wear during re-entry, and are loaded with sensors to make sure the whole thing won’t mess up actual people when it happens. According to a press release, the dummies are also the same kind that automakers use to test front-end collisions.

This was the first drop NASA’s released on video, but the Orion is going to get a lot more turns on the giant crane-swing over the next few weeks. NASA has to make sure that every scenario they can think of is tested, putting in all the variables of parachutes, height, angle of entry, etc. that they can possibly recreate in their laboratory (which, in this case, is a big pool).

Check out the video below: