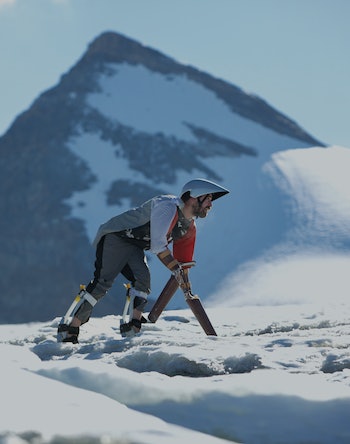 Goats seem like they have it good. The four-legged ruminants can eat just about anything, be adorable or terrifying, and easily find work as lawn care specialists. Of all the animals on Old McDonald’s farm, goats are the ones that give the fewest fucks. This is presumably why the Goat Simulators inspired a massive following and definitely why Thomas Thwaites, author of a book about trying to make a toaster from scratch, decided to become a billy.

For his new book GoatMan: How I Took a Holiday from Being Human, Thwaites donned a four-legged exoskeleton, cultivated a funky-smelling beard, and grazed with a herd on a Swiss mountain. But, over the course of a three-day vacation from humanity, Thwaites stumbled headfirst into an inconvenient truth: Being a goat is harder than it looks. Thwaites’s experiment tested him in ways he hadn’t expected it to and forced him to confront both his own humanity and the elemental aspects of goat-ness.

Thwaites spoke to Inverse about sucking down predigested grass, going speechless with magnets, and how to harvest fungi from a goat gut.

What was the hardest part about adapting a human’s anatomy to a goat’s?

You look at the anatomy of a goat’s front leg and a human’s arm and hand. The structure is the same, there are equivalent bones in both types of limbs. So I thought, well, it wouldn’t be that difficult. It’s just a matter of lengthening here and elongating there, and fusing a few bones, and you’ve turned a human arm into a goat leg.

It seems simple, in theory.

Exactly. I went to see an anatomist at the Royal Veterinary College who is a specialist in quadruped mobility. I said to him that it seems obvious that it should just require one or two simple tweaks, and I should be able to gallop on four legs. He found that quite funny. When I started pressing him, he countered my idea. He pointed out that there are homologous structures between every creature on the planet. He was much more aware of the subtleties.

You seemed to surmount these subtleties with your goat exoskeleton. What was the most uncomfortable part about being inside?

Weirdly, it was my knuckles. A goat is effectively up on its tiptoes, the same way a ballet dancer walks on the tips of his or her toes. I went to some prosthetists who usually make artificial limbs for amputees, and they agreed to help me make them. It was a way to be up on the tips of my fingers, and so we ended up putting quite a lot of pressure on my knuckles.

How did you design your “artificial rumen,” which allowed you to digest plant material?

I made a bag of food-safe silicone. The plan was that I would rip up some grass with my teeth, chew it up, and then instead of swallowing it, spit it into one end of this U-shaped bag. I was firstly thinking I would have a culture of the [goat] bacteria and fungi, which I would take a sample of from a goat. I wasn’t entirely sure how I was going to get that sample, because you’d have to stick a tube down a goat’s throat or make it sick. But basically, after getting a sample of that bacteria and fungi, I’d put it in the U-shaped bag, and I would have this bag strapped to my torso so it would be warm and the bacteria and fungi would multiply. Out of the other end of the U-shaped bag, I would suck the half-chewed, fermented grass mixture and swallow that, and it would go into my true stomach and digest it in the same way a goat does. That’s where I ran into this problem of health and safety.

What did you end up doing in the end?

I had to pressure-cook everything. I would take the contents of the U-shaped bag, pressure cooker it, then eat that.

To think like a goat, you decided to shut down the parts of the brain dealing with episodic memory and language using transcranial magnetic stimulation. Why those regions?

The idea is that humans are very adept at mental time travel. We’re very good at remembering what we had for breakfast and imagining what we’re going to have for dinner and how we’re going to get that. We always thought that goats don’t possess this kind of episodic memory.

To shut that down and to shut down my ability to speak, a goat behavioral psychologist told me that those are two key things that separate human mental processes from goats. I went to a neuroscientist that uses transcranial magnetic stimulation and asked him if we could induce virtual lesions in the parts of my brain that were responsible for my episodic memory and my ability to imagine the future and also my ability with language. He said he couldn’t help with the memory one, because that would involve giving me a lobotomy. But he spent the morning trying to target a specific area of my brain, which, if you interfere with the area, stops the person from being able to speak.

The only concerns were that it might induce a seizure. But he said, ‘Oh, don’t worry, a seizure is nothing to worry about.’

How did it feel to have that part of your brain shut off? Were you very suddenly unable to speak?

It was kind of a weird stuttering sensation, in a weird kind of way. To reach that patch of cortex, that part of your brain, the magnetic field also passes through nerves running down the side of your face, into your teeth. It was quite difficult to concentrate on working out how this interference with my brain felt, when I was actually having toothache induced, as well. It was physically uncomfortable as well as mentally uncomfortable. The next day, one of my metal fillings fell out. It wasn’t very comfortable, at all.

What lessons could we learn from goats?

I’m still slightly frustrated. I was hoping to be able to gallop and just be free of all human concerns, but it was very far from that. I had half been thinking that it shouldn’t be too difficult to become a goat — to go backwards — to become a more primitive animal, but then you realize that goats are just as specialized as humans. They’ve been evolving for just as long. It’s just they’ve been involving into nimble, mountain-dwelling, grass-eating creatures, while we’ve been evolving into big-brained, shopping bag-carrying beings. For me, it leveled humankind with the other animals on the planet.

Altogether, it sounds like it was a pretty humbling experience.

Yes, it was pretty humbling, being down in the dirt with a herd of goats.