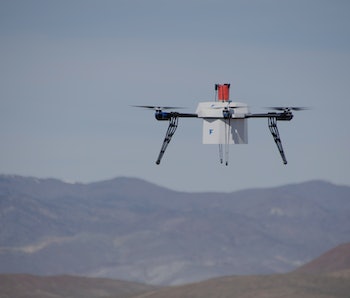 When an earthquake devastated Haiti in 2010, there were hundreds of thousands of deaths from the immediate aftermath, but it was a cholera epidemic, the first in a century for the region, that killed thousands more for months and years after the initial disaster.

Timothy Amukele, assistant professor of pathology at Johns Hopkins University School of Medicine, says drones could prevent a repeat of those mistakes.

“What ends up causing the most sickness and death is disease in the long term,” Amukele tells Inverse. “That ends up being the real killer, because you destroy the infrastructure that people depend on for hygiene and water and once that’s gone it’s a lot easier for diseases to spread.”

They will attempt to show how the company’s drone can transport blood and stool samples from patients on the coast back to high tech ships for testing.

The test will take place off the coast of Cape May New Jersey and it follows the company’s previous drone demonstration earlier this year, which was the first FAA approved drone delivery in the U.S.

Amukele says there are advantages to delivering medical supplies via drones, because it means organizations don’t need to transport large expensive labs into the field, they can do all the tests in ships off shore.

“We already have systems to support communities that don’t have infrastructure but they’re not that nimble,” he says. For example, organizations can fly helicopters to the relief area, but that requires a pilot, an area to land, and someone on the ground to clear the area and make sure children aren’t in the way.

With the drones, teams on the ground can help collect samples, load up the drones, and have necessary supplies delivered to them faster and cheaper. Other companies have been interested in the power of drones in search and rescue operations as well as other disaster relief scenarios.

Flirty is focusing on coastal areas because eight of the 10 largest cities in the world are coastal cities, and more than three billion people, or 44 percent of the world’s population, live within 95 miles of the coast, according to the United Nations.

“Imagine a future where in the event of a natural disaster like Hurricane Sandy, Flirtey drones rapidly deliver emergency medical supplies, food, and water,” Matt Sweeny, Flirtey CEO, said in a press release. “This demonstration is helping to make that future a reality, and taking us one step closer to Flirtey’s mission to save lives and change lifestyles.”

More like this
Innovation
Sep. 21, 2022
Look: Drones could be the future of 3D-printed architecture
By Jennifer Walter
Innovation
Oct. 5, 2022
Worm spit could be a secret cure to the world's plastic problem
By Molly Glick
Innovation
Oct. 2, 2022
Want a better relationship with your dog? Neuroscientists say these 7 factors are key
By Tara Yarlagadda
Share: