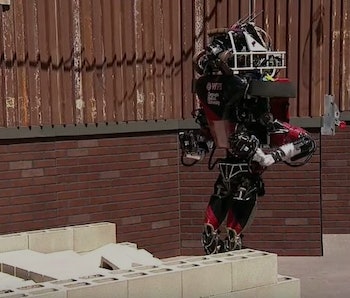 Spend enough thinking about robots and you’ll arrive at one inevitable conclusion, that they offer a fix to the fundamental flaw in the human system: mortality. Robots can calculate and formulate at astonishing speeds, but they can also go where humans fear to tread, which is why disaster relief experts have been eyeing AI for the past two decades and looking, increasingly, to smart drones as potential front-line allies. It’s worth noting that the descendant of ASIMO, Honda’s adorable shuffling PR bot, was built to climb over rubble.

Still, hardy as they might be, bots and drones aren’t great at formulating strategies for their own. Here’s what mankind has planned for the next generation of emergency equipment.

When more traditional lines of communication are either inoperable or overloaded in an emergency, a fleet of drones could come to the rescue. This vision, presented at a communications conference in March by a team of electrical engineers from the University of Science and Technology of China, involves “drone-assisted multi-hop device-to-device” program built to enable a mobile wireless broadband network. It’s a system that should have particular appeal to the FirstNet organization, a U.S. agency created in 2012 to build a national communications network on the 700 MHz spectrum.

Finding survivors in an emergency is considerably easier from the air than from the ground. In 2005, in the aftermath of Hurricane Katrina, UAVs were deployed to scan the Mississippi with thermal cameras. These early drones were tougher to use and launch than the machines used in 2015 to capture video of Nepal:

As drones get easier to use, however, human curiosity becomes a problem. Rubbernecking with drones is an inconvenience at best and at worst a hindrance to responders with jobs to do. Or the firefighters just hydroblast your pesky drone out of the sky.

In war zones and areas of conflict, airdropping medicine and other humanitarian aid to civilians is a tricky business: There’s always the risk of getting shot down. A startup called Uplift Aeronautics wants to pull the human pilots out of the sky and still deliver help. Mark Jacobsen, the director of Uplift, told CBS San Francisco, “If someone is trying to starve out a neighborhood, we can flood that place with food, with medicine, and send a message that the world won’t stand for that.” Uplift hasn’t been deployed in conflict zones but is testing the ability of delivery drones to make 100,000 kilometer trips carrying a 2-kg payload.

Metal Boots on the Ground

There was a notable absence of robots at the Fukushima disaster, even in the heart of robot country. Four years later, at the DARPA robotics challenge finals, you get a sense why: Walking on two legs is tough, and so is hand-eye coordination. Over the course of eight hours of real-time footage, you can watch robots staring at valves and doorways as they slowly, precisely reach out with a gripper or digit. (For a particularly exciting moment, fast forward to right around the 6-hour mark for a robot that manages to climb a staircase. It was the first one to do so in the challenge. Crowd goes wild.)

When aerial drones don’t cut it, turn to insects on the ground. Cockroach physiology is a marvel of evolution — as anyone who’s tried to squash the little buggers knows. Robotics have copied the cockroach shape to build efficient traveling machines, which could crawl through rubble impossible for larger searchers (like us).

Or you could stick a microphone on the back of a roach and wire a circuit board to its antennae, and steer the cyborg bug toward the sounds of survivors.