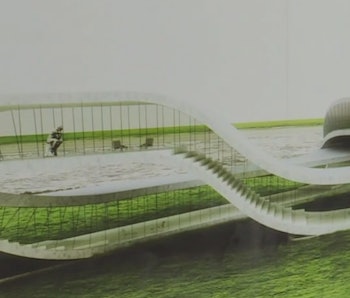 Scientists are using 3D printers to reattach nerves, while Nike 3D-prints sneakers. Multi-dimensional printing is nothing if not a flexible technology. Now, it’s being applied to make the world weirder. A Dutch architect has revealed the 3D printer he’ll use to create an “endless” home inspired by Möbius strips.

Janjaap Ruijssenaars, the Dutch architect spearheading the “Landscape House” project, first revealed his boundary-pushing idea in 2013. The reveal of the 3D printer is the first sign in awhile that it’s likely to come to fruition, but things are looking good. “It’s just like a normal printer, but instead of putting ink onto paper, we are putting a liquid onto sand which solidifies wherever the liquid has been spread,” Ruijssenaars told AFP. Project partner Rutger Sypkens further extols the machine’s design, noting that it’s quick, unlikely to make mistakes, and environmentally friendly since it requires fewer materials to make the shapes into which the concrete is poured.

Ruijssenaars’ plan is to use the six-and-a-half-feet long D-shaped printer to print the building with 12,000 square feet of floor space. The team is currently testing out the printer designed by Enrico Dini in an Amsterdam warehouse before beginning the official prints.

The Landscape House’s “endless” design was inspired by Earth’s infinite structure that has no beginning or end. It took the team quite a while to figure out how to represent that infinite structure, but a well-known mathematics concept came in handy. “Planet Earth doesn’t have a beginning or an ending and we were looking for a shape that has the same quality,” Ruijssenaars said.

The original plan for the Landscape House did not involve a 3D printer, but it eventually became clear that 3D printing was the most promising way to construct the building, which will hopefully be used as an exhibition space once completed. If the Landscape House does become an exhibition space, its innovative design will indicate that art spaces of the future will be judged by the design of the space itself in addition to the art on display.