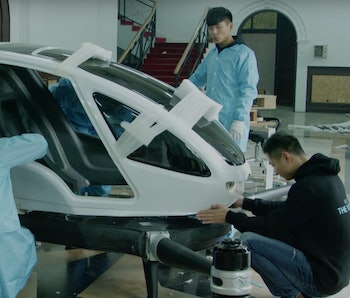 The Ehang 184, an autonomous drone capable of carrying a human passenger for up to 23 minutes, has received approval to begin flight testing in Nevada. The flying vehicle, unveiled in January at CES, will be the first autonomous drone to undergo a formal government approval process. Chinese firm Ehang, which designed and built the prototype, is working with the Nevada Institute for Autonomous Systems (NIAS) and the Governors Office of Economic Development (GOED) to seek approval from the Federal Aviation Administration to begin selling the vehicle commercially.

“The State of Nevada, through NIAS, will help guide Ehang through the Federal Aviation Authority regulatory process with the ultimate goal of achieving safe flight,” Tom Wilczek, a GOED aerospace and defense specialist, told The Guardian.

The eight-propeller, battery-powered drone makes many of the same claims advanced by the autonomous vehicle industry as to why their produce will displace current modes of transportation. Even if it only flies for 23 minutes as of now, by skipping roads and avoiding traffic, Ehang could conceivably reduce commute times if it reaches its max speed of 63 mph efficiently.

Additionally, if the CEO’s assertions are correct, most flying and driving fatalities are the result of human error, and by the same token, the Ehang flies autonomously, the passenger (or pilot) retains very little control over the drone’s actual direction.

Ehang may be based in Guangzhou, China, but the state of Nevada has long sought to represent itself as a central hub of autonomous vehicles, particularly regarding cars. Now, Nevada officials have developed perhaps as ambitious a view of what the Ehang can be as Ehang does itself.

“I personally look forward to the day when drone taxis are part of Nevada’s transportation system,” said Wilczek.

The drone still has numerous obstacles to overcome, not the least of which is convincing consumers that the potential price tag between $200,000 and $300,000 makes sense. The flight testing itself will undoubtedly put the vehicle’s sensors to the test, requiring the vehicle to demonstrate the ability to avoid trees and power lines as well as birds. The drone’s emergency landing will also need a thorough review, and the FAA would have to establish guidelines on flight regulation and control.

The Ehang 184 is capable of flying 1,000 to 1,650 feet off the ground with a maximum altitude of 11,500 feet and top speed of 63 miles per hour. That poses a lot of room for danger to other airborne vehicles, like planes, likely requiring the Ehang navigational system be linked to air traffic control to guarantee no interference.

There are a lot of questions that remain in the air about how the Ehang 184 will move forward, but it’s clear we’ve made a lot of progress on passenger-carrying drones, since those students from University of Singapore were our best shot.